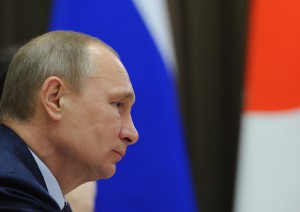 Asahi: Abe must not drop principles in new approach to Russia

Sankei: Stick to principles even with new approach

On May 6, a Japan-Russia Summit Meeting was held in Sochi, Russia. Prime Minister Abe and President Putin agreed to hold several more summit meetings within the year in order to overcome the current stalemate in Japan-Russia negotiations over the Northern Territories issue “through a new approach that is not stuck in a traditional way of thinking.” Abe also presented a cooperation plan with eight points, including energy development and developing industries in the Far East.

The five national dailies covered this summit meeting in their editorials for May 8. While they all generally recognized the importance of continuing a dialogue between the leaders, most also stated the importance of acting carefully, from the perspective of cooperation with Western countries whose relations with Russia have worsened due to the Ukraine crisis. Additionally, they mentioned that as the host nation for the G7 Summit, it is necessary for Japan to explain its policy on Russia.

■ Holding to Principles on the Northern Territories Issue

The Asahi approved of Abe’s future-oriented stance on negotiations with Russia, but also stated: “But Abe should not forget one key principle Japan needs to maintain. It dictates that Japan must not accept any ‘change of the status quo by force’ regarding the territorial dispute and other bilateral issues.” The paper also mentioned “Tokyo’s dialogue with Moscow could be productive only if the Abe administration works closely with the governments of Western democracies that share this universal principle.”

The Asahi also pointed out that the details of the “new approach” the two leaders agreed on is still unclear, stating “The most important question Abe should answer is what the ‘new approach’ exactly means.”

On the subject of multiple Japan-Russia summit meetings being held within the year, such as with Abe traveling to Vladivostok in September, the Yomiuri wrote that this “suggests how resolved Abe is over the territorial issue,” but also noted “It is extraordinary for a Japanese prime minister to make successive visits to Russia.” The paper is referring to the fact that Abe has visited Russia four times, while Putin has not traveled to Japan to meet Abe.

The Mainichi also pointed out that the lack of reciprocation for Abe’s visits to Russia is “diplomatically unusual.” Stating that Russia, isolated in the international community, is using the continued dialogue with Japan to its advantage, the paper urged caution: “We would like to reconfirm that it is not an option for Japan to become close to Russia at the expense of strong Japan-USA relations and solidarity among the G7 nations.”

While the Nikkei agreed that “continuing summit meetings is vital” in order to encourage concessions from Russia, and that “building trust between the two leaders is important,” the paper also stated “there is a large gulf between Japan and Russia on territorial issues.” In particular, the paper noted the difficulty of Japan and Russia meeting halfway, mentioning how Putin said that continued dialogue is necessary to solve the issue while also insisting it was the Japanese government that restricted dialogue.

The paper with the most negative opinion was the Sankei, firmly stating “A ‘new approach’ that abandons Japan’s policy of seeking the return of the four islands is unthinkable.” Despite the two leaders agreeing three years ago to look for “solutions that both sides find acceptable,” the daily stated there has been absolutely no progress, with negotiations falling into a stalemate, and went so far as to question “Is it even possible to find such a solution for these territorial issues?”

The Asahi and Mainichi both had critical opinions of this cooperation plan. The Mainichi gave its analysis that with economic sanctions against Russia and low prices for resources such as crude oil “Many Japanese businesses have become wary of investing in Russia. For the time being, the only option is to carry out simple cooperation while looking for long-term possibilities.”

The Asahi was also of the opinion that the recent approach to Japan by Russia is due to a desire to “poke holes in the international alliance,” and questioned “Under these circumstances, what are Abe’s cooperation proposals trying to achieve and how can they be consistent with the diplomatic principles that must not be betrayed?” The paper stated that “Abe needs to offer the international community convincing answers” on occasions such as the G7 Ise-Shima Summit to be held in Japan on May 26 and 27.

On a different note, the Sankei warned that every time Russia hinted at progress on negotiations over the Northern Territories in the past, “We must not forget the history that they were always seeking economic gain.” In particular, the paper clearly restated its critical position on how Russia unilaterally annexed the Ukrainian territory of Crimea: “This is a ‘change of the status quo by force,’ and an outrage that is fundamentally the same as what was done in the Northern Territories. Economic cooperation with Russia should be approached carefully.”

The Yomiuri and Nikkei both approved to some degree of the proposal for economic cooperation with Russia, but suggested the possibility of Japan-Russia security cooperation should be considered given the instability in Northeast Asia. The Yomiuri in particular touched on keeping security in mind while carrying out negotiations: “Of course, economic cooperation alone cannot immediately achieve a breakthrough on the issue. We instead believe that the key will be for Japan to create a situation in which Russia puts real effort into boosting bilateral relations with Japan as Russia faces Chinese influences.”

The Nikkei also approved of the proposal for Japan-Russia cooperation, saying “there is potential for economic cooperation between Japan and Russia considering their proximity.” However, with the instability in Northeast Asia due to China’s increasing militarism and North Korea’s nuclear weapons program, the paper stated “There is room for Japan and Russia to cooperate in the field of security... While working to build a foundation for territorial negotiations, cooperation to the benefit of both nations should also be pursued.”