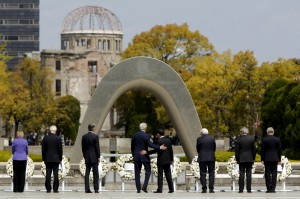 Sankei: Prepare for nearby nuclear threats as well

Nikkei: G7 should hurry and agree on a strategy for China and Russia

The Group of Seven (G7) Foreign Ministers’ Meeting took place in Hiroshima City on April 10 and 11. During the meeting, ministers adopted the Hiroshima Declaration on Nuclear Disarmament and Non-Proliferation, and the Statement on Maritime Security. On April 11, the G7 foreign ministers visited the Peace Memorial Park and laid wreaths at the cenotaph for atomic bomb victims, before also visiting the Atomic Bomb Dome at the suggestion of US Secretary of State John Kerry.

This is the first time since the Second World War that foreign ministers of the nuclear weapon states France, the UK, and the USA have visited Hiroshima, the site of the first nuclear bombing, and all five of Japan’s national newspapers praised this gesture in their editorials on April 12. In particular, the Asahi, Mainichi, and Nikkei indicated their hopes for President Obama to visit Hiroshima when the G7 Ise-Shima Summit is held in May.

■ Significance of the Hiroshima Declaration

The Hiroshima Declaration starts off by stating “The people of Hiroshima and Nagasaki experienced immense devastation and human suffering as a consequence of the atomic bombings.” The Mainichi provided the strongest praise for the Declaration, calling it a “historic message dispatched from Hiroshima” in an extended editorial. At the same time, the paper declared that Republican Party presidential candidate Donald Trump’s suggestion that Japan and South Korea be armed with nuclear weapons, saying “Japan never has the option to go nuclear from a political and historical viewpoint.”

The Asahi said the Hiroshima Declaration should “help accelerate the world’s march toward a future without nuclear arms,” and emphasized the necessity of Japan, as the only country to have been bombed with nuclear weapons, to act as an intermediary with nuclear weapons states. However, the paper also stated that as a guiding document for future G7 efforts, the Hiroshima Declaration “lacked the impact needed.”

The Yomiuri also approved of the Hiroshima Declaration: “It is highly significant that the Group of Seven ... issued a clear message to pursue the eradication of nuclear weapons, doing so from a city flattened by the atomic bomb.” The paper also emphasized that “Based on the Hiroshima Declaration, Japan should strive to restructure the international cooperative regime on nuclear non-proliferation.”

The Sankei commended the Hiroshima Declaration and the G7 foreign ministers visit to the Peace Memorial Park, but also soberly assessed that “The G7 cannot create a ‘world without nuclear weapons’ alone.”

■ Possibility of the U.S. President Visiting Hiroshima and Nagasaki

At a press conference held after visiting sites including the Hiroshima Peace Memorial Museum, US Secretary of State John Kerry said that “I will certainly convey to him [Obama] what I saw here and how important it is at some point to try to get here,” which greatly increased hopes that Obama would visit Hiroshima. The editorials of the different papers disagreed on how likely this possibility was, but the Mainichi urged that “As the most influential leader in the world, Obama should visit Hiroshima and Nagasaki when he comes to Japan in May to attend the G-7 summit.”

The Asahi also argued that if Obama, whose term as president ends in January next year, “sends out a message calling for the elimination of nuclear arms in an atomic-bombed city, its impact will be immeasurable. We urge Obama to make the political decision to visit Hiroshima for the future of the world.”

Based on “President Obama considering the visit,” the Nikkei stated that “we hope he will take this major first step towards a ‘world without nuclear weapons,’” as Obama first called for in his 2009 speech in Prague.

The Yomiuri introduced Kerry’s comment from after he visited the Peace Memorial Museum, “I don’t see how anyone could forget the images ... of what happened,” but the paper also pointed out that “Opinions that dropping atomic bombs on Hiroshima and Nagasaki was justified are still strong in the United States. Kerry’s visit to Hiroshima must be used as a step toward closing the gap in perception of nuclear weapons between Japan and the United States,” giving an indication that there are still obstacles to overcome for an incumbent US president to visit Hiroshima or Nagasaki.

In addition to nuclear issues, the Sankei commented on the acceleration of developing and stockpiling nuclear weapons in China and North Korea, stating that “The nuclear weapons of neighboring countries are undeniably a real threat,” and warned that close negotiations should be continued with the US to “examine whether the nuclear umbrella is truly reliable.”

In response to the G7 Statement on Maritime Security, adopted for the second year in a row, the Yomiuri remarked on China making military bases on man-made islands in the South China Sea, emphasizing that “In cooperation with Southeast Asian nations, the G-7 must tenaciously call on China to refrain from self-serving actions.”

The Nikkei, commenting on China’s actions in the South China Sea and Russia’s actions in Ukraine, stated that “the G7 must further strengthen their efforts against China and Russia.” However, the paper also mentioned “The disparity inside the G7 of how to deal with China and Russia, and what responsible actions to encourage, has become clear,” noting the necessity for the G7 to agree on a strategy for China and Russia.