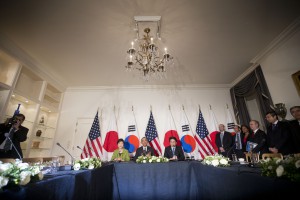 Sankei: Was a united front towards China demonstrated?

On March 31, for the first time in two years a trilateral meeting was held in Washington between Japan, South Korea, and the USA’s heads of state. With North Korea’s escalating military provocations, such as nuclear tests and missile launches, the three nations agreed to increase trilateral security cooperation. On April 2, the Yomiuri, Mainichi, Nikkei, and Sankei carried editorials about the summit, all of which welcomed increased cooperation between Japan, South Korea, and the USA.

However, they mentioned the issue of no concrete progress having been made on security cooperation between Japan and South Korea, and all four papers suggested the General Security of Military Information Agreement (GSOMIA) be concluded as soon as possible.

Commenting on North Korea’s test launches of ballistic missiles capable of carrying nuclear warheads, the Mainichi mentioned that “It is widely believed that North Korea has not yet developed nuclear warheads,” followed by a warning that “Pyongyang has steadily improved its technology levels.”

The Nikkei, mentioning that the fact Japan is within range of the medium-range Nodong ballistic missile North Korea launched most recently should not be overlooked, provided its analysis that the “direct threat to Japan” had increased by another step. The paper also indicated a sense of crisis, saying “the Korean Peninsula is in a state of extreme tension.”

While stating that “’Diplomacy of intimidation’ is North Korea’s usual tactic” and “overreaction is unnecessary,” the Yomiuri argued that it is essential for Japan to “maintain deterrent capabilities.” The paper also stated that “it is vital for three countries — Japan, the United States and South Korea — to expand trilateral cooperation and tighten the encirclement of North Korea.”

One common theme among the four papers was a call to conclude the General Security of Military Information Agreement (GSOMIA) as soon as possible, which had been unilaterally delayed by South Korea in June 2012 right before signing, due to South Korea’s domestic situation. This is clearly a reflection of a shared understanding that in order to deal with North Korea, nothing is more vital than stable improvement in relations between Japan and South Korea.

The Yomiuri argued that in order to “step up pressure on North Korea through the strict implementation of the U.N. Security Council resolution, it is important for the three countries to play a leading role and work further on obtaining cooperation from China and other relevant countries.” The paper also indicated the importance of “pulling South Korea, which had leaned toward China, back toward Japan and the United States.”

The Mainichi also stated that in order to have effective cooperation between the three countries “a good relationship between Japan and South Korea is indispensable.” However, the paper also pointed out the difficulty of improving relations by mentioning that for the comfort women settlement that Japan and South Korea agreed to, there are still “opponents to the accord in both countries, and implementation could face obstacles.”

With North Korea escalating their military provocation ahead of the Workers’ Party of Korea Congress planned for May, the Nikkei urged Japan, South Korea, and the USA to “make every effort to ensure a solid missile defense system that can handle any unforeseen eventualities.”

The Sankei alone also argued for the necessity of a united front against China from the trilateral summit.

Mentioning that the three heads of state discussed China’s unilateral maritime expansion in the South China Sea, the paper stated that “When considering regional security with the USA, and its two allies Japan and South Korea, coordination when dealing with China is of vital importance.” The paper explained that ensuring the safety of sea lanes in the South China Sea is beneficial to international society as a whole, including Japan, South Korea, and the USA, and declared that “actions threatening this [safety] cannot be ignored.” The paper also emphasized that in order to increase the effectiveness of economic sanctions against North Korea, it is critical for Japan, South Korea, and the USA to “coordinate a united front against China.”

*English translations of The Yomiuri and The Mainichi are from The Japan News and The Mainichi, respectively.  Those for The Nikkei and The Sankei are provisional. The content of this page was made by the Foreign Press Center Japan and does not reflect the opinion of the Japanese Government or any other organization.