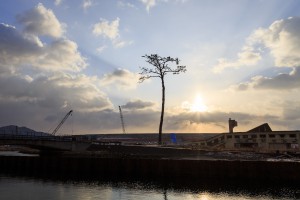 The Asahi: The voices from Tohoku must be heard 5 years after the disaster

The Sankei: Provide support to help disaster-hit areas get back on their feet

The Nikkei: Send information abroad about Japan facing up to the nuclear disaster

The Mainichi: Face the reality of Fukushima to move forward together

The Yomiuri: Ensure steady steps for revival of areas hit by massive quake

Five years have elapsed since the Great East Japan Earthquake.

The five national dailies discussed the present state of the reconstruction process in the disaster-hit areas—as well as challenges that should be addressed in rebuilding them—in their respective editorials dated March 11, the fifth anniversary of the disaster.

“How many people in other parts of the nation far from the stricken areas truly understand the harsh realities in communities battered by the disasters?” The Asahi Shimbun posed this question and discussed both the “psychological distance” between the areas struck by the disaster and other areas, which it said has grown as time passed, and the challenges that must be overcome to fill the gap.

“In this world, people’s hearts are not one,” The Asahi said. “History is littered with many examples of painful divisions among people, including the cases of Hiroshima and Nagasaki, the only cities to suffer a nuclear attack, communities afflicted by pollution-caused diseases like Minamata disease, and Okinawa Prefecture, which has been forced to bear an excessive burden of hosting U.S. military bases.”

“Various areas around this nation have been suffering on their own and fighting the pain caused by misunderstandings and perception gaps,” The Asahi continued. “Exchange is growing between Fukushima Prefecture and other areas grappling with these problems.”

The paper then argued, “Everyone in Japan should pay fresh and serious attention—and respond—to the messages people in the affected areas are sending out.”

The Sankei Shimbun stressed, “Support from now on to the disaster-afflicted areas—with the exception of Fukushima Prefecture that is still suffering from the effects of the nuclear accident—should be provided in a way to help them get back on their feet.” The paper introduced activities to reconstruct the city of Kamaishi, Iwate Prefecture, as a model case in this regard.

“What the disaster highlighted were distortions in Japanese society,” The Sankei said in concluding the editorial. “It is significant in the reconstruction process for the affected areas to search for ways to resolve these distortions. It is certain that the entire Japanese society will follow the footsteps of these regions implementing advanced undertakings. We believe that the afflicted areas will someday be proud of themselves for making a true reconstruction by presenting model endeavors to the rest of Japan and the world.”

“All Japanese people must continue to face up to the accident, learning lessons from it,” The Nikkei stressed. “Japan bears a responsibility to honestly tell the international community about the reality of radioactive contamination and any progress made toward reactor decommissioning. The nation must present to the world its outlook regarding how it plans to utilize nuclear power after the nuclear accident occurred.”

The paper also said “the world is watching closely how Japan will position nuclear power in its energy policy in the long-term,” adding “Japan must incessantly look into the accident and enhance the safety of nuclear power plants, while at the same time presenting long-term prospects for energy use, including what role nuclear energy should play.”

The Mainichi Shimbun’s editorial also pivoted around Fukushima Prefecture. The paper said “it is necessary to grasp the real state of radioactive contamination and the amount of damage that is still continuing now” to answer questions like “How much land has been contaminated with radioactive substances?” “How can damage from the nuclear disaster be repaired?” “Can those who have evacuated from their hometowns go home in the future?”

Furthermore, the paper made a suggestion by saying: “Japan must not adopt its past stance in implementing disaster recovery measures over the next five years. The government should implement realistic policy measures. The time is ripe for the country to begin drawing up an annual ‘Fukushima white paper’ that squarely faces damage from the atomic power disaster to provide a basis for such realistic disaster recovery measures.”

The Yomiuri Shimbun, for its part, addressed problems associated with the current state of the disaster-hit areas. “Amid the slackening of reconstruction, residents who have abandoned hope of rebuilding their lives in their own local communities have moved out one after another, accelerating the depopulation and aging of communities that were prevalent before the disaster,” The Yomiuri said. “This is a serious issue that is common to the disaster-hit areas.” The paper introduced the initiatives undertaken by the town of Onagawa and the city of Ishinomaki, both in Miyagi Prefecture, to stop their populations from further decreasing.

The paper urged central and local governments to reconsider how reconstruction projects will be carried out. “Local governments will start paying some of the costs of these projects from the next fiscal year,” it said. “The effectiveness of these projects should be questioned more closely than before. The necessary approach is to ascertain the effects of each project, and then distribute the fiscal resources to projects beginning with the highest priority. We hope reviews will be conducted on projects already under way.”