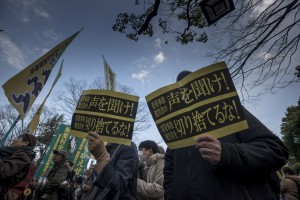 The Sankei: Can execs be held criminally responsible for natural disaster?

The Yomiuri: Court must judge carefully in trial of forcibly indicted TEPCO execs

Former Tokyo Electric Power Co. Chairman Tsunehisa Katsumata and two other former executives who helmed the utility at the time of the 2001 nuclear accident at the Fukushima No.1 nuclear power plant have been forcibly indicted on charges of professional negligence resulting in death and injury.

Previously, the prosecution twice decided not to indict the three executives, citing insufficient evidence to back up the allegations. However, a committee for the inquest of prosecution—comprising 11 randomly selected members of the public—later concluded that the executives could have predicted massive tsunami, thus preventing the accident from occurring. In response, court-appointed lawyers, in lieu of prosecutors, forcibly indicted the executives at the Tokyo District Court.

“Many citizens have taken a dim view of the fact that nobody has been held accountable for the nuclear accident, which the company claims was ‘beyond expectation,’” The Asahi said. “TEPCO’s profit-oriented policy is also believed to be behind the failure to take sufficient safety measures at the plant.”

The Nikkei said, “Investigations conducted so far by the government and the Diet have not clearly identified why the accident was not prevented, and nobody has been held accountable for the accident,” adding that the “forcible indictments reflect the public’s candid feelings about this situation.”

For it’s part, The Yomiuri, said: “As this is a difficult issue over which conclusions reached by lawyers and citizens have differed, the court is required to make an impartial and careful examination on the basis of evidence.” Commenting on the response taken by the committee for the inquest of prosecution, the paper noted, “Perceivable is the panel’s stringent stance of calling on the operator of nuclear power plants to take measures to realize ‘zero risk,’ or the complete elimination of any risk.”

The Sankei raised questions about the case by saying, “Can individuals be held criminally responsible for a natural disaster?” and “How should the predictability of the accident be evaluated?”

■ How will the court case evolve?

“In order for an individual’s negligence to be recognized in a criminal trial, prosecutors have to prove that the accused had recognized specific risks of an accident,” The Yomiuri said. “The key to the task is whether the designated lawyers can produce convincing evidence.”

The paper also stressed that “it will be quite significant for Katsumata and two other executives to state their opinions concerning safety steps taken for nuclear power plants directly before an open court.” It also said the case will provide an “important opportunity to examine what sorts of issues were discussed over possible risks involving earthquakes and tsunami between TEPCO officials and regulatory authorities prior to the accident.”

The Sankei honed in on a focal point of the trial: “In general, investigators carefully examine specific evidence in a professional negligence case if the damage was predictable; probe whether there was a causal relationship between that damage and the defendant’s action; and decide who should be held accountable,” the paper said. “During the trial, a major point of contention will be how to define the duty of care imposed on nuclear power plant operators.”

The Asahi said “the trial can reveal important facts about the information the former executives had before the accident and the decisions they made in responding to the information,” expressing its hope that it “will shed light on problems with the organization and corporate culture of a large utility operating many nuclear reactors so that important lessons can be gleaned.”

The Nikkei said: “In the course of the trial, points of contention will include how the three executives regarded a report they received on the possibility of tsunami as high as 15.7 meters hitting the power plant, and whether the plant could have taken realistic measures to prevent power loss due to inundation. It is hoped that those concerned will follow the trial to help formulate better safety measures.”

The Sankei said “the standards applied by the prosecutors and members of the inquest committee differ widely, as the former are believed to expect a more than 99 percent conviction rate for indictments, while the latter tend to let the court decide whether the defendant is guilty or not.”

The Nikkei opined, “The essence of the inquest system is to determine whether an indictment is necessary from a standpoint that differs from that of prosecution, but it is necessary to debate whether this system of dual standards should continue.”

Meanwhile, The Asahi said “more efforts are needed to draw crucial lessons to ensure nightmarish nuclear accidents will never happen again.” It urged the reconsideration of the roles of Diet-appointed commissions tasked with investigating accidents, as such panels had “finished their work in about one year, leaving many stones unturned.”

*English translations of The Asahi and Yomiuri are from The Asia Japan Watch and The Japan News, respectively, while those for The Nikkei and The Sankei are provisional. The contents of these pages were produced by the Foreign Press Center/Japan and do not reflect the opinion of the Japanese Government or any other organization.