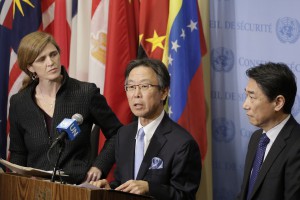 The Asahi: Sanctions against North Korea ineffectual without China on board

The Yomiuri: Japan should lead push for tough UNSC resolution on North Korea

In response to North Korea’s nuclear weapon testing and launch of a long-range rocket suspected to be a ballistic missile, Japan, the United States and South Korea have taken steps to impose their own sanctions against the nation. The Japanese government has imposed travel restrictions, including a ban on the reentry of foreign nuclear and missile engineers who have visited North Korea, as well as a ban on entry into Japanese ports by all vessels of North Korean registry. South Korea has decided to suspend North-South Korea joint operations at the Kaesong industrial complex. The U.S. Congress, meanwhile, passed legislation on broadening sanctions against North Korea: With China in mind, it has made companies of other countries subject to sanctions if they are found to be involved in the transaction of materials related to North Korea’s nuclear and missile programs or the export of luxury goods to the nation. President Barack Obama is expected to sign the bill into law shortly.

The four dailies supported concerted efforts by Japan, the United States and South Korea in meting out sanctions against North Korea, and spelled out issues for Japan to address.

The Yomiuri explained Japan’s responsibilities, saying: “It is important not to ignore the reckless actions repeatedly taken by North Korea and to swiftly implement tough sanctions against that country. Japan should play a leading role in a concerted effort by the international community.”

The Yomiuri then discussed responses Japan should take: “... the government needs to respond flexibly to North Korea, by not cutting off openings for dialogue, for instance.”

“The government must adhere to its policy of comprehensively resolving the issues of the Japanese abductees and North Korea’s nuclear and missile development, and deal with them tenaciously.”

The Sankei said it is appropriate for “Japan, the United States and South Korea to take joint steps in applying tougher pressure on North Korea,” expressing its hope that “their own steps will lead to a U.N. Security Council resolution imposing strict sanctions against North Korea.” The paper also supported the stance of Prime Minister Shinzo Abe, who said—after the sanctions were decided—that the government would keep its policy of seeking a comprehensive resolution of issues over the abduction of Japanese nationals, and nuclear and missile programs, by saying “his judgment was only natural.”

The Asahi underscored the significance of the three nations’ concerted efforts at a time when the U.N. Security Council has struggled to agree on a draft resolution on North Korean sanctions.

The Asahi highly evaluated Japan’s sanctions against North Korea, but added that the nation should be cautious. The paper said: “(M)any Korean residents in Japan have relatives living in North Korea. Japan’s measures should be considered carefully to ensure they do not simply inflict pain on these people.

The Mainichi discussed North Korea’s announcement on February 12 that it had halted investigations into the abduction of Japanese nationals. “It is difficult to expect any progress only over the abduction issue at a time when North Korea is betraying international good faith to push its nuclear and missile programs forward,” the paper said. “Japan now needs to be tenacious in searching for a path to solve both abduction and security issues.”

The Mainichi said “China will never benefit by confronting Japan, the United States and South Korea, which are united over the handling North Korea.” The paper then called for China’s action by saying “it is necessary for China to urgently make a decision (on North Korean sanctions)” and that it “should never do further foot-dragging as a permanent member of the Security Council.”

The Asahi urged Japan, the United States, and South Korea to get more tightly united. “The three countries should also send a strong diplomatic message to China. To prod reluctant policymakers in Beijing into action, the three allies should say they have no choice but to take a more critical stance toward China if it tries to provide excessive protection to the reckless Kim Jong Un regime.”

The Yomiuri is also critical of China’s stance. “(T)his conciliatory stance taken for many yeas by China has bolstered North Korea, letting Pyongyang conduct nuclear tests and missile launches repeatedly,” the paper said. “This time, it is vital to strengthen real pressure on North Korea.

“It is important for Japan, the United States and South Korea to unite to urge China to modify its stance.”

*English translations of The Yomiuri and The Asahi are from The Japan News and The Asia & Japan Watch, respectively.  Those for The Mainichi and The Sankei are provisional. The content of this page was made by the Foreign Press Center Japan and does not reflect the opinion of the Japanese Government or any other organization.