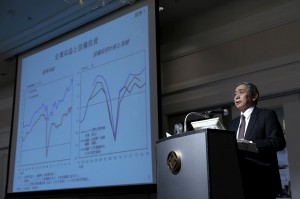 The Asahi: With the chips down, the BOJ tosses its policy dice again

The Sankei: Know limits of relying too much on BOJ

The Nikkei: Hold talks on market stabilization without relying too much on BOJ

At its Policy Board meeting at the end of January, the Bank of Japan decided to introduce a negative interest rate—which requires financial institutions to pay handling fees when depositing money with the central bank—for the first time. At a press conference, BOJ Governor Haruhiko Kuroda stated “By demonstrating that we will do whatever is necessary, we will convert deflationary mindsets.”

A negative interest rate was adopted by the European Central Bank in June 2014. A similar monetary policy has been taken by Switzerland, Denmark and Sweden. However, the vote at the BOJ meeting was a narrow one, with four out of the nine board members opposing the policy, which some point out may produce adverse side effects.

Of them, The Yomiuri Shimbun welcomed the BOJ’s additional money easing policy. “International financial markets have descended into chaos since the beginning of this year, heightening anxiety over the future of the global economy,” The Yomiuri said. “Considering that, the BOJ should be praised for taking the flexible and prompt action.”

The Nihon Keizai Shimbun (Nikkei) gave a certain degree of praise to the policy, saying “the BOJ’s response was understandable as it is taken to prevent the Japanese economy from slipping back deep into deflation, with a prolonged decline in commodity prices.” The economic daily, however, maintains that Japan must clear many hurdles if it wants to boost its economy.

The Sankei Shimbun also gave a qualified approval to the BOJ move, which it said was “a manifestation of its strong will to prevent—by any means—the global financial market turmoil from scuttling Japan’s efforts to end deflation.” The paper nonetheless added “it would be too optimistic to think the measure will immediately turn around the economy.”

The Asahi Shimbun and The Mainichi Shimbun, meanwhile, have serious doubts about the new BOJ policy.

“Japanese banks, however, are not ramping up their lending despite historically low interest rates because corporate demand for funds is weak,” The Asahi said. “The introduction of a negative interest rate policy will not change this basic factor behind sluggish lending growth.”

The Mainichi, meanwhile, gave a severe assessment about the policy. “In short, (the policy was introduced) because the unprecedentedly bold easy-money policy that the BOJ implemented had failed to produce sufficient effects that the central bank strived to achieve.”

The Yomiuri expressed its expectations about positive effects from the new policy. The paper said “the reduction of interest rates in general could be expected to activate investors who are willing to take risks for profits, prevent the yen’s appreciation and boost stock prices” and that “the policy would help small and medium-sized businesses and venture companies raise funds more smoothly, and will boost investment in new business ventures.”

But, stressing that monetary policies alone will not end deflation, The Yomiuri urged the government to “develop and carry out its growth strategy quickly.”

The Nikkei pointed out that “the quick move by the BOJ is designed to help realize wage hikes in spring negotiations between the employers and employees.” Nonetheless, the paper said “it is difficult to continuously improve the state of the economy with BOJ’s monetary easing alone,” urging the government to accelerate the implementation of its growth strategy by lowering the effective corporate tax rate and revamping the so-called bedrock (firmly entrenched) regulations.

The Sankei also said there are limits to what the BOJ can do alone to address economic woes. “Not to mention, a negative interest rate is a powerful but dangerous prescription, which many fear could trigger side effects, such as reductions in bank earnings,” The Sankei said. “Without a boost in actual demand, the policy will not lead to a virtuous economic cycle.”

The newspaper then urged both the government and the private sector to do more. To have a robust economy, “the government must support corporate activities through deregulation and other measures, and corporations must be proactive in their business management.”

The Asahi also pointed out a possible side effect, saying “this approach could prompt commercial banks to pass the interest rate costs on to consumers by imposing negative interest rates on their deposits.” The paper then concluded its editorial by saying: “it is clear that Kuroda’s way of providing a big positive surprise to markets every time economic situations at home and abroad become unstable cannot be sustained for long. Kuroda’s modus operandi is now reaching its limits.”

The Mainichi expressed grave concerns about the central bank, which has repeatedly issued additional easy money measures in its quest to meet the goal of a 2% increase in commodity prices. “What is most worrisome is that the measure could significantly damage confidence in the BOJ that is supposed to protect the value of the yen,” the paper said. “(Taking bold measures to attain the inflation target) is feared to cause the value of the yen to plummet.”

The Nikkei and The Yomiuri stressed the importance of coordinating monetary policies among the Group of 20 (G20) nations and regions, and among advanced countries.

“Actions of central banks in each country have significance to calm the turbulence of markets,” The Yomiuri said. “There is concern for the future of emerging economies. Financial authorities of Japan, the United States and European countries in particular must understand the necessity for developed countries to lead the global economy and take every means possible to have dialogues with markets. Enhancement of policy coordination is also essential among them.”

The Nikkei said: “The key to stabilize global financial markets from now on is getting China—the second largest economy in the world—involved. At the G20 level, nations must hold discussions for a global scheme of cooperation.”