Lifting of sanctions against Iran 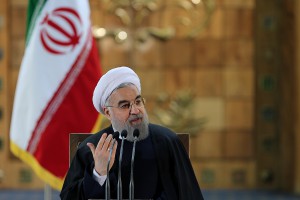 The Mainichi: Ensure lifting Iran sanctions will lead to a stable Middle East

The Nikkei: Use settlement of Iranian nuclear problem as leverage to stabilize Middle East

The Sankei: Iran’s return to international community is not yet complete

The Yomiuri: Use implementation of Iran N-deal to build stability in Middle East

The lifting of sanctions against Iran by the United States, European nations, and other nations has been announced, unlocking an estimated $100 billion in frozen Iranian assets. The move came after the International Atomic Energy Agency certified Iran had scaled down its nuclear power plants and removed uranium from the facilities in accordance with the final accord sealed last July with six nations—the United States, Britain, Germany, France, Russia and China.

The five national dailies discussed the development in their respective editorials dated January 19.

The Asahi described the lifting of the sanctions as “a step indispensable for lasting stability for the Middle East and the rest of the world if one looks at it from a broad perspective.” Considering how Israel and Saudi Arabia are concerned about the possibility of Iran getting closer to Western nations, the paper said at stake is “how to make the new political landscape in the Middle East widely tolerated.” It then urged efforts by countries concerned to prevent confusion—brought about by the change in the power map—from worsening.

The Nikkei said “reconciliation between the regional power of Iran and the international community should provide a foothold for halting the turmoil,” and praised how “The threat of nuclear proliferation was successfully defused using diplomacy.”

The Yomiuri said: “Given the release of U.S. citizens, including a reporter, who had been held by Iran, the channel between the two countries with no diplomatic relations has strengthened. How to use this to end the civil war in Syria and wipe out the Islamic State of Iraq and the Levant (ISIL) militant group is now the question.”

The Sankei noted that “For Iran, this will be a first step to escaping the international isolation they have experienced since the 1979 Islamic Revolution,” and opined that Iran’s full-fledged return to the global community “must be made on the condition that the country will faithfully abide by the (final) accord.”

The Nikkei underscored the importance of Japan’s role in Middle Eastern affairs. “Saudi Arabia is the biggest exporter of crude oil to Japan,” the paper said. “Japan maintained its own channel with Iran even after the 1979 revolution. Maintaining good relations with both Saudi Arabia and Iran, Japan should play the role of a bridge between the two nations.”

The Asahi said: “The wisdom of putting tension over a nuclear program under control peacefully through diplomatic means is needed in dealing with the North Korean issue. The Iranian problem is also serving as a model case in preventing nuclear proliferation.” The paper then urged the Japanese government to use ingenuity in getting itself involved for a stable Middle East.

The Sankei called for a strong response to Iranian missile development, saying “Japan, as it is under threat from North Korean nuclear weapons, cannot overlook this. Iran must be strongly encouraged to abide by the UN Security Council Resolution.”

The Mainichi said the United States, European nations and Russia would be more actively pursuing investment in and trade with Iran. It pressed Japan to proactively expand the scope of business with the nation, by saying “Japan should not miss this chance” and that “it should take advantage of its traditionally good relations with Iran to expand trade with the country.”

The Yomiuri also expressed expectations for Japan’s expanded investment in that nation. “Japan, which has concluded an investment agreement with Iran, expects diversification of its sources for crude oil procurement, an increase in automobile exports and an entry into plant facilities construction and management,” the paper said. “Effort must be made to promote information gathering and realize participation in the Iranian market.”

*English translations of The Yomiuri are from The Japan News, and those for The Asahi, The Mainichi, The Nikkei and The Sankei are provisional. The content of this page was made by the Foreign Press Center Japan and does not reflect the opinion of the Japanese Government or any other organization.