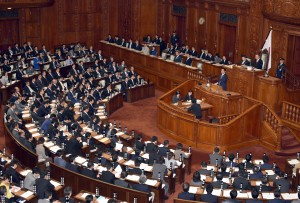 The Asahi: Lawmakers can’t be allowed to obscure issues on Japan’s future course

The Yomiuri: Abe in 4th year must use stability to overcome policy challenges

With the 190th ordinary Diet session convened on January 4, The Nikkei Shimbun discussed the first Diet session held in about three months in its editorial dated January 4, and The Asahi Shimbun, The Mainichi Shimbun and The Yomiuri Shimbun took up the subject in their respective editorials the following day.

“At the Upper House election, Japanese voters will have to decide on whether to give Abe a clear and lopsided mandate to pursue his political agenda,” The Asahi said. “The election could shape up as a major turning point for postwar Japan.”

“The Diet session will offer an important opportunity for the public to think about the nation’s future course before the Upper House election.”

However, the newspaper was critical of the Abe administration for its politics focusing on winning elections above all else.

The Mainichi underscored the importance of this parliamentary session.  “How [Diet] deliberations will turn out will affect how ruling and opposition camps will shape their points of contention in the House of Councillors election this summer,” the paper said. “The session should be regarded as a forum to comprehensively examine ‘Abe politics’ now that three years have elapsed since the inauguration of the second Abe administration.”

The newspaper then urged Diet members to conduct active discussions explaining how financing will be found for the introduction of the reduced tax rate [to food items and some other daily necessities] when the consumption rate is raised [to 10 percent] as well as details about the Trans-Pacific Partnership accord and future plans for reconstruction five years since the Great East Japan Earthquake.

Referring to speculations that both chambers of the Diet might hold simultaneous elections this summer, The Nikkei said: “The minimum voting age will be lowered to 18 from the upper house election. On what standard should young voters rely when voting? Diet deliberations must present easy-to-understand choices to voters who are not familiar with politics.”

The economic daily, however, cautioned that “if they are not careful, this Diet session might end uneventfully,” pointing to the government’s plans of submitting a fewer number of new bills than usual and postponing the tackling of challenges that may affect the upper house election.

The Yomiuri urged the Abe administration, which has entered its fourth year since the prime minister returned to power, to take advantage of the long and stable administration to tackle important issues such as an end to deflation and fiscal reconstruction, realization of regional invigoration and a ‘society enabling dynamic participation by all citizens,’ and proactive contribution to peace.

But the paper stressed “Abe must bear in mind that he should conduct Diet business humbly without being complacent about the numerical strength of his party and provide the people with thorough explanations about his policies,” saying “not a few people offer the Abe administration passive support as they consider it only to be more or less ‘better than a Democratic Party of Japan-led government.’”

■ What is expected of opposition parties

The Asahi demanded opposition parties offer a “realistic alternative” to the “Abe administration’s dominant power,” saying as long as “the opposition camp remains fragmented, there will be no political force that can effectively represent people concerned about the direction in which the government is trying to lead the nation.”

The Mainichi said the opposition parties carry heavy responsibility in this Diet session. “The Democratic Party of Japan, in particular, should strenuously create opportunities for discussion and help formulate points of contention for the election—instead of simply criticizing the administration,” the paper said. “They should present viable visions in such issues as narrowing the economic gap among the people.”

The Nikkei said that “What is important now is building the groundwork for politics. We would like to see a two-party system developed where they do not just argue over ephemeral issues in attempts to gain popularity.”

The Yomiuri said, “They won’t be able to win wider support from voters if they merely criticize the Abe administration while failing to put forward any convincing counterproposals.” The LDP criticizes the DPJ, the Japanese Communist Party and other parties joint support of independent candidates as an “ultimate collusion,” and “any attempt to rally forces merely for the sake of an election without forming agreements on policies is nothing but “a union of convenience.”

Speculations are rife that the Abe administration may try to initiate the process to revise the Constitution after the upper house election. The four newspapers discussed the issue in their editorials.

“Whether the ruling camp can win enough seats to enable it to initiate the process to revise the Constitution will be a major focal point of the upper house election,” The Mainichi said. “It is hoped that parties will help carry out robust discussions on their constitutional views and other pertinent issues by using such forums as party head debates at the Diet.”

The Asahi said: “If the ruling coalition wins in simultaneous elections for both Diet houses, the administration will have three years to pursue its policy agenda without having to face any national poll. Even if Abe does not opt to dissolve the Lower House for simultaneous elections, a victory in the upper chamber will give the coalition more than two election-free years.

“That will create a political environment that allows the Abe administration to make even bolder political moves than those it has already taken, including initiating a constitutional amendment.”

The Nikkei questioned if “it is acceptable for the ruling and opposition parties not to underscore clear differences in their policies ahead of the election, which could become a watershed in postwar politics.” It added that “it would run counter to the wishes of constitutional amendment proponents if they won the necessary seats without voters’ acceptance.”

The Yomiuri encouraged further debate, saying “We hope the ruling and opposition parties first of all earnestly begin discussions toward narrowing down the subjects to tackle regarding constitutional revision.” As an example, the paper pointed out that “It is a defect of the Constitution that there are no stipulations that would make it possible for the term of office of the Diet members to be temporarily extended at the time of a major disaster when it would be difficult to hold an election,” and encouraged the LDP’s suggestion that the addition of stipulations for emergencies be one item that should be prioritized.

*English translations of The Yomiuri and The Asahi are from The Japan News and The Asia & Japan Watch, respectively. Those for The Mainichi and The Nikkei are provisional. The content of this page was made by the Foreign Press Center Japan and does not reflect the opinion of the Japanese Government or any other organization.