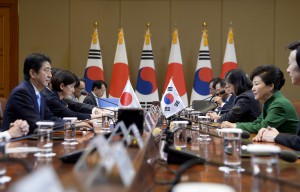 Nikkei: “Japan, ROK should carry out more summits and hurry to improve relations”

Prime Minister Shinzo Abe held his first summit meeting with South Korean President Park Geun-hye at her presidential Blue House on November 2, during which the two leaders agreed to accelerate talks to achieve an early settlement on the so-called “comfort women” issue—the most difficult, outstanding issue between the two nations.

During the talks, they also discussed economic and security issues, including policies toward North Korea.

The five national dailies discussed the summit meeting in their respective editorials on November 3, but their evaluations of the meeting differed widely.

The Nihon Keizai Shimbun (Nikkei) highly evaluated the meeting, saying “the holding of a summit meeting itself was epoch-making....  The two nations should use the summit meeting—held at long last—to spur efforts to improve their ties.”

The Mainichi Shimbun also hailed the meeting. “We hope this gives momentum to efforts to steadily improve bilateral ties.”

The Yomiuri Shimbun, on the other hand,  was questioning, “Will the meeting between the top leaders of Japan and South Korea break the stalemate in the confrontation over issues of historical perception and territory, thereby leading to the restructuring [of] the bilateral relationship into a future-oriented one?”

The Sankei Shimbun said an abnormal situation—in which summit talks have not been held for a long time—was over. But, pointing out the fact that detailed information about the meeting has yet to be released, the newspaper said, “The two nations perhaps avoided emphasizing their differences, as they tried to portray the meeting as a major step forward in improving their relations.”

As opposed to these views, The Asahi Shimbun firmly stated, “... the current state of the bilateral relationship is too complicated to be improved as a whole by just one meeting between their leaders. It is, however, true that both Tokyo and Seoul are well aware of the urgent need to put their relations on better terms.”

The five newspapers also differed significantly over the “early settlement” of the comfort women issue.

The Asahi and The Mainichi called for settling the issue in favor of former comfort women. The Yomiuri and The Sankei supported the government’s stance that the issue was completely settled with the 1965 bilateral accord regarding properties and claims.

The Asahi commented: “In their negotiations over the comfort women issue, Tokyo and Seoul must avoid focusing on defending national prestige. Instead, the two countries need to put the top priority on coming up with the best possible measures to heal the deep psychological wounds the harsh experiences left in these women.” Regarding the response the two governments should take, the paper said “... they have no choice but to make mutual concessions if they want to strike a deal...”

The Mainichi urged the two governments to make efforts to find common grounds as soon as possible. “Interest in wartime sexual violence heightened worldwide following the conflicts that devastated the former Yugoslavia in the 1990s,” The Mainichi said. “The comfort women issue is often viewed in the international community as one type of such violence.

“At a U.N. General Assembly session and on other occasions, Prime Minister Abe has declared that Japan is willing to actively support victims of sexual violence, with those in war-torn areas in Africa and other regions in mind. Settlement of the comfort women issue will earn the international community’s appreciation of such assistance by Tokyo.”

The Yomiuri, on the other hand, said:  “If Park really wants to resolve the issue, she should make clear what South Korea would do, rather than demanding that Japan make unilateral concessions,” The Yomiuri said. “For instance, removing the statue of a comfort woman near the Japanese Embassy in Seoul would be a good starting point.”

The Sankei also said: “We can fathom that the two nations want to make some kind of progress in this milestone year—the 50th anniversary of the normalization of Japan-South Korea diplomatic relations. It goes without saying that Japan’s basic stance can never be compromised. There is no need to make an ambiguous settlement, which will provide the fodder for controversy later.”

The Nikkei urged the government to find common ground with the South Korean government for “a final settlement acceptable to both countries from a humanitarian perspective, while upholding its basic stance over the matter.”

The Yomiuri and The Mainichi had differing opinions about Ms. Park’s policy toward China.

“Park has been moving ever closer to China not only in the sphere of the economy but also in national security, as seen by her attendance at a military parade held in China in September,” The Yomiuri said. “The United States also does not hide its distrust of Park’s actions.”

“To prevent China from changing the status quo with its use of force (by filling in shoals to create islands in the South China Sea), it is essential to reinforce security cooperation among Japan, the United States and South Korea. It is important for Tokyo and Washington to strongly counsel Seoul to avoid getting too close to China.”

The Mainichi disagreed. “… the two countries have different views on the rise of China,” the newspaper said. “Observations persist in Japan that South Korea has drawn too close to China. However, it is only natural that Japan and South Korea have different views on China, considering these two countries’ historical and geographical relations with China. Such differences should not be used as an excuse for Japan and South Korea’s failure to cooperate with each other.”

*English translations of The Yomiuri, The Asahi and The Mainichi are from The Japan News, The Asia & Japan Watch and The Mainichi, respectively. Those for The Nikkei and The Sankei are provisional. The content of this page was made by the Foreign Press Center Japan and does not reflect the opinion of the Japanese Government or any other organization.