Is the US–China Trade War Going to Lead to a New Cold War? 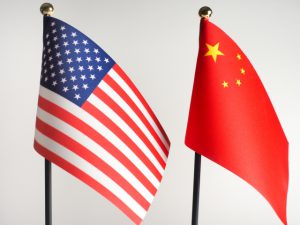 The trade war between the US and China continues to escalate, with the two countries exchanging blows through sanctions. On May 27, President Trump, in Japan, commented that China “would like to make a deal. We're not ready to make a deal," indicating it was unlikely the trade war would end soon. Although the situation may seem similar to the trade conflict that occurred between Japan and the US in the late 1970s and 1980s, a major difference is that unlike Japan and the US, China and the US are not allies, and so there are strong concerns that the conflict will extend beyond trade to a power struggle involving political structures, economic frameworks, and security. This has led to increased discussions about a new cold war beginning between the US and China.

■Voice, June
In an article in Voice titled, “The postwar historical phase and a new US–China cold war (The threat of China unveiled with instability in the post-Cold War order),” National Graduate Institute for Policy Studies President Akihiko Tanaka predicted that the new cold war between the US and China, the biggest international political issue right now, will continue over the long term.

According to Tanaka, the US is looking at China as “attempting to compete with and confront the US over ideology, as the Soviet Union did,” and in his analysis, “There is increasing concern over the threat posed by China’s military expansion and its geopolitical move to extend its influence throughout Asia, Africa and even Europe with the Belt and Road Initiative.

As another factor behind why China’s industrial policy has become seen as a major threat, Tanaka noted China’s violation of other countries’ intellectual property rights, forced technology transfer for companies investing in China, and the blatant theft of US technology.

He gave his opinion that if China continued to expand its military and oppress human rights, “Even if a kind of compromise continued when it comes to trade, it is very likely the US’s stance towards China would become something similar to its stance towards the USSR in the 1980s.”

Tanaka concluded that with a new cold war between the US and China on the horizon, “How can Japan find a way to build a positive relationship with China, its largest trading partner, while maintaining the solidarity of the alliance with the US in the areas of security and technology? This will be a difficult issue for Japanese diplomacy.”

In his New Global Geopolitics column in Bungeishunju, journalist Yoichi Funabashi wrote that President Trump’s actions showed, “The logic of a superpower, rejecting multilateral negotiations and focusing on only unilateralism or bilateralism, with a love of ‘deals’ in which allied nations and unallied nations are both seen as potential targets for utilitarian deals.” He warned of the risk this represents for Japanese diplomacy.

Funabashi stated that how the Trump administration deals with China, which it has targeted as a direct strategic rival, will be critical to the future of Japan–US relations, commenting, “There are concerns that without determining a policy on China, the US will move towards an ‘America First’ attitude of being against China and distance itself from Japan.” Considering this risk, he stated that the “unnatural intimacy” of Donald and Shinzo was almost surreal, referring to a criticism by George F. Kennan of Japan–US relations during the occupation of Japan under General MacArthur.

In an interview with Prime Minister Abe by Soichiro Tahara which ran in Chuokoron, the prime minister commented on US-China relations: “When considering global peace and stability, and economic development, it is very important that US-China relations become stable.” Speaking of the economy in particular, he stated, “There is a need to build a free and open economic order based on fair rules, and Japan is displaying leadership in doing so,” and revealed that he was asking China to deal with specific issues such as the protection of intellectual property rights, the activities of state-owned enterprises, electronic transactions, and the free flow of data.

While noting the possibility of a US-China summit being held at the G20 Summit which is taking place in Osaka at the end of June, Abe stressed, “Continuing to exchange trade sanctions with each other will not benefit either country. Trade must be carried out following the WTO’s rules. I have said as much to both President Trump and President Xi.”

He also stated that while Japan believes in the importance of multilateralism, “There is also the strong Japan-US alliance and my relationship allowing me to speak frankly with President Trump, so I would like to ensure the G20 Summit goes well.”

■Newspaper Editorials (May 12)
-Asahi: “Us-China trade war—Persist in negotiations to find a solution”
-Mainichi: “US increasing tariffs on China—A serious situation that has gone beyond trade”
-Yomiuri: “US, China must end quagmire through constructive dialogue”

The Mainichi stated that the escalation of the US-China trade war came from a deep-seated opposition based on the different political systems of the two nations, and argued, “This situation is beyond the level of simple trade negotiations, and is now a serious global power struggle over the economy and security.”

The Yomiuri also indicated that they viewed the trade war as a power struggle, and argued, “To correct China’s actions, the US should be cooperating with Japan and Europe to apply pressure through a multilateral framework.” The paper also warned of the risk that the US would threaten sanctions on Japan and take a hardline stance insisting on concessions when it comes to Japan-US trade negotiations.

Both papers accepted that the industrial development policy and other Chinese polices the US has a problem with are fundamental to China’s national strategy and cannot be negotiated as they are related to the one-party rule of the Communist Party. However, they also argued that it was necessary for China to carry out reforms on issues such as its unfair practices and violation of international rules. The two papers warned that if the US tries to restrain China through force, it would lead to significant instability in the international order.

In contrast, the Asahi was of the opinion that the issue has remained as only a trade war and that there was hope in the fact that the two countries continue negotiations without breaking them off. Noting that the environment allowing for negotiations has not been critically damaged, the paper calls for both nations to negotiate and work towards an agreement.

In its May 16 editorial, The Economist (UK) predicted US-China relations would remain stressed over the mid- to long-term: “The two superpowers used to seek a win-win world,”  but they have entered into “a new kind of cold war that could leave no winners at all.” In contrast, the editorials of Japan’s leading papers have indicated hopes for reaching an agreement through continued discussions, with comparatively restrained arguments.