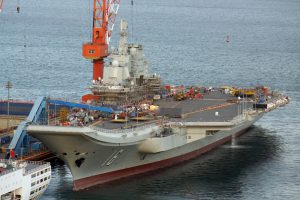 The New National Defense Program Guidelines and the Medium Term Defense Program were adopted by the Cabinet in December 2018. In an essay in Gaiko Vol. 53 titled “The focus of the new Defense Guidelines and Medium Term Program,” Satoshi Morimoto, chancellor of Takushoku University and former Minister of Defense, approved of the guidelines and program overall, stating, “They are far more complete than any previous ones, and are extremely comprehensive, considering all possible factors.” Regarding the fact that the guidelines, which are normally revised every ten years, were revised after five years, he argued that the reason was “they needed to be more closely based on reality,” considering the security environment surrounding Japan has rapidly and materially changed.

As the key points to focus on from the new Defense Guidelines, Morimoto listed: 1) Organically fusing Japanese defense capabilities to respond to cross-domain threats, 2) With the phrasing “truly effective defense capability,” expressing a strong determination to have defensive capability which can deliver certain damage to the opponent, and 3) Building a “Multi-Domain Defense Force” to deal with global issues, and strengthening the Japan-US alliance toward this purpose as well as increasing multilateral security cooperation for increased effectiveness. Regarding the Medium Term Defense Program (for five years, from fiscal year 2019), which will make the Defense Guidelines a reality, Morimoto focused on the introduction of Short Take-Off and Vertical Landing (STOVL) fighter aircraft. He mentioned how the Chinese aircraft carrier the Liaoning passed through the waters between Okinawa and Miyako, and argued, “There is a need to increase our marine defensive capabilities, considering China’s expansion into the Pacific.” He noted that during the period covered by the Medium Term Defense Program, China would shift to having three aircraft carriers.

Ms. Sayo Saruta, a lawyer and the director of the New Diplomacy Initiative think tank, wrote in an essay in Sekai titled “Analysis of the fourth Armitage/Nye report” that the fourth Armitage/Nye report, released in the US last October, was “calling for stronger integration and alliance between Japan and the US,” in order to confront China as it undergoes economic and military expansion. She also stated that the report was arguing “how important the Japan-US alliance is,” as President Trump continues to neglect the importance of allies.

The report calls for strengthening bilateral economic ties, deepening operational coordination, advancing joint technology development, and expanding cooperation with regional partners. In particular, Saruta emphasized that the suggested initiatives of 1) Having US and Japanese forces operating from combined bases, 2) Establishing a combined joint task force in the Western Pacific, 3) Creating a joint operations command with the Japanese forces, and 4) Combined contingency planning, indicated a “trend towards advanced integration between Japan and the US.”

However, commenting on the report overall, Saruta stated doubts that by positioning China as something that might “change the power balance,” efforts were being made to guide Japan toward making “the Self-Defense Forces easier for the US to use.” Noting that the report is based on the assumption that “Japanese and American interests are the same,” she stated, “There are cases when Japan and the US have different interests,” and argued that US-China relations and US-Taiwan relations were completely different from Japan-China relations and Japan-Taiwan relations. Saruta stated, “Although this fourth report was written by prominent American scholars of Japan, it will have no direct impact on the current administration,” arguing that this report would not have the same influence the first three Armitage/Nye reports did. Commenting, “If the Japan-US alliance continues to strengthen its military at the current pace, it will lead to the security dilemma of an endless arms race, as well as the possibility of accidental conflicts and excessive escalation, and in those cases it will be Japan being damaged directly,” she argued, “It is necessary to stop and think about why the decision was made in the past that ‘exclusive defense’ was appropriate.”