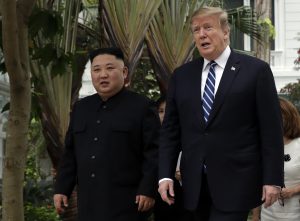 In his New Global Geopolitics column (titled “The argument that South Korea is strategically expendable”) in Bungeishunju, journalist Yoichi Funabashi stated that South Korea has been leaning towards the argument that “Japan is expendable” since the time of the conservative administration, but he noted that the “South Korea is expendable” argument heard in the US during that time “seems to have grown stronger under the Trump administration.” Funabashi also stated that while there were growing concerns in South Korea about a return to the strategy of the “Acheson Line” proposed by former US Secretary of State Dean Acheson in January 1950, which would mean having US troops leave Korea and relying on military bases such as those in Okinawa as a line of defense against communism, according to his analysis, “It seems unlikely that will become a popular idea again in the US right now.”

However, Funabashi also stated that if the “deals” involved in the denuclearization negotiations between US President Trump and North Korea’s Chairman Kim Jong-un were to weaken the US–South Korea alliance, and the Moon administration accepted that, the “indivisibility” of Japan–US–South Korea defense could collapse and the argument of South Korean expendability could rise to prominence. Funabashi commented, “What is frightening is that hasty ‘deals’ could be made that are insufficient for denuclearization, leading to North Korea obtaining nuclear weapons,” and warned that if that happened, “This would mark a failure of American deterrence…and bring about serious questions about the reliability of nuclear deterrence.”

In an essay in Voice titled “The stagnation of denuclearization and the ‘Trump Show,’” Katsuhisa Furukawa, a former member of the Panel of Experts of the United Nations Security Council Committee on North Korean sanctions, criticized the denuclearization negotiations with North Korea by the Trump administration, noting that it seems like they are being used as “political theater” in order to create a foreign policy success, and commenting, “In no way does it seem like they are taking it seriously.” Furukawa stated that the pillars of the Trump administration’s foreign policy are “cutting off Iran” and “fighting China’s challenge to US hegemony,” and stressed, “(North Korea) does not trust Trump, who they do not know if he will still be in the Oval Office two years from now. It is unlikely they would hand over their most important ‘resources,’ nuclear weapons and missiles, to someone like that.”

While clearly starting that the US–North Korea negotiations had just started and “Trump must not be allowed to think of the negotiations with North Korea as simply a way to score points,” Furukawa argued that Japan “should carry out all possible diplomatic efforts to ensure that even if denuclearization does not proceed as desired, there is at least no regression.”