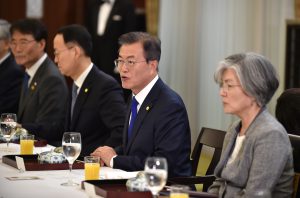 Japan–South Korea relations have been worsening, with the South Korean court order that Japanese companies pay compensation for wartime forced labor and the radar lock-on dispute involving a Republic of Korea Navy vessel and Japan Maritime Self-Defense Force aircraft. In an essay in Chuokoron titled “Research on the leadership of the peculiarly hands-on Moon Jae-in,” Kobe University professor Kan Kimura provided his analysis on the current state and background of the Moon administration’s “strategic neglect” of Japan. While introducing President Moon’s unique background, such as how he comes from a family that fled from North Korea during the Korean War, Kimura also pointed out Moon’s peculiar leadership style, including his lack of experience in building relationships with foreigners, how he trusts few people and places those he trusts in positions directly reporting to him, and how he uses his own practical business experience to become directly involved in the details of government work.

In particular, Kimura noted that Moon is particularly uninterested in foreign policy, and so, “He is focused on relations with North Korea, and interest in other areas of foreign policy is limited.” Stating that Moon sees South Korea’s ally the US as nothing more than “a variable when it comes to rapprochement with North Korea,” and that Moon has decided China supporting South Korea in regards to North Korea is sufficient, so China–South Korea relations are “not moving to a surprising degree,” and Kimura stressed that when it came to Japan–South Korea relations, “He does not appear to see any meaning in relations with Japan.”

Kimura noted strong concerns over the Moon administration lobbying the US about Japan, viewing Japan as “an interfering factor” in South Korea’s policy of rapprochement with North Korea. He stressed that as a result, the Moon administration has decided “Japan has no role to play in the denuclearization of North Korea,” and has chosen “strategic neglect” to avoid taking any unnecessary risks with Japan–South Korea relations. Noting that “it would be difficult to change the policy” of Moon, who has significant authority, Kimura argued that for future Japan–South Korean relations, “The time will come when he is forced to change his policy…. It will be necessary to continue keeping an eye on the situation for the time being.”

In a roundtable discussion titled “Breaking off relations between Japan and South Korea: a complete simulation” which ran in Bungeishunju, with members including Nobuya Takasugi (former chairman of Korea Fuji Xerox), Takashi Fukuyama (former Japan Ground Self-Defense Force lieutenant general), Yuki Asaba (professor at University of Niigata Prefecture), and Katsuhiro Kuroda (visiting editorial writer in Seoul for Sankei Shimbun), Terusuke Terada (former Japanese ambassador to South Korea) clearly stated that even though some arguments have been made in Japan to “sanction” or “break off relations” with South Korea, “Breaking off relations is not a particularly realistic option.” He noted that, unlike previous times Japan and South Korea were at odds, this time relations have worsened due to “Japan reacting intensely to events which occurred in South Korea,” and that he was very concerned about President Moon Jae-in not being “pro-North Korea” or “anti-Japan,” but instead “not very interested in Japan.” Terada also commented that the lack of a strategy in Moon’s Japanese policy is “extremely dangerous.”

Terada also declared, “Japan is losing to South Korea’s propaganda when it comes to historical issues,” and based on the assumption “the ‘battle of words’ with South Korea will continue for the foreseeable future,” her argued the necessity of Japan continuing to argue its point of view to the international community, carrying out PR tactics targeting foreign media and not keeping the issue as a bilateral one, in those cases where Japan is in the right, such as the court case on payments for wartime forced labor. Terada further mentioned that with increasing travel between Japan and South Korean, economic interdependence, and cultural exchange, “No matter how intense the political conflict becomes, there is no need for much worry at the civilian level,” and so called for Japan to act calmly. In particular, stating that “economic stability will create stability in Japan–South Korea relations,” he called for rapidly concluding the Japan–Korea Free Trade Agreement which has been under negotiation since 2003.

In a roundtable discussion in Seiron titled “Should relations with South Korea be broken off?” including Yoshiko Sakurai (journalist) and Tsutomu Nishioka (guest professor at Reitaku University), Katsuhiro Kuroda (visiting editorial writer in Seoul for Sankei Shimbun) stated that the recent atmosphere in Japan calling for sanctions or breaking off relations with South Korea “seems like a new ‘Seikanron (advocacy for invasion of Korea in the early Meiji period),’” and he stressed that sanctions and breaking off relations “would not just be ineffective, they would be damaging to Japan.” Regarding economic sanctions on South Korea, he commented that while it was true South Korean industry relied on Japan’s technological capability for materials and parts, according to studies by the Japan External Trade Organization (JETRO) 85% of Japanese companies are turning a profit on South Korea, making them an excellent customer, and Kuroda noted, “The companies would like to avoid getting involved in political issues.”

Kuroda further stated that “South Korea’s value” to Japan included not just those economic aspects mentioned above, but also security: “Considering the rise of China, it is important for Japan to get South Korea and the Korean Peninsula on its side.” He also noted the value of the people of South Korea themselves, arguing, “Many of them are fans of Japan.” According to Kuroda, “South Korea is still very much under the influence of Japan,” suggesting that when problems arise, South Korea will see how Japan has reacted and try to learn from the Japanese model. Noting that South Korea has a population of over 50 million and over 10 million people travel between Japan and South Korea in a year, he declared, “Pushing South Korea away and breaking off relations would honestly be a waste.”