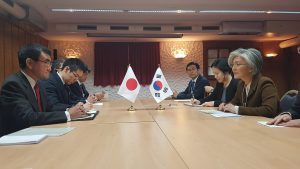 In an essay in Voice titled “Increasing complication in the Middle East and South Korea acting emotionally,” Dr. Masayuki Yamauchi, the University of Tokyo professor emeritus, criticized South Korea for unilaterally dissolving the Reconciliation and Healing Foundation established based upon the December 2015 bilateral agreement on the comfort women issue, saying, “South Korea broke an international agreement with Japan, using judicial independence as a pretext. It may not be going too far to describe this as a challenge to the international community.” Commenting on South Korea under the Moon Jae-in administration, Yamauchi said, “People frequently say that they are ‘moving the goalposts.’ But I believe they have gone so far as to eliminate the goalposts…. What more is Japan supposed to do? South Korea is operating under a major misunderstanding.”

Regarding the issue of the denuclearization of North Korea, he stated, “Disposing of nuclear weapons and halting the development of missiles is something the international community as a whole wants.” However, Moon’s goal is above all the reunification of the Korean Peninsula, and Yamauchi criticized the stubbornness of the Moon administration: “Whether the reunification is advantageous to North Korea or whether they will keep nuclear weapons, the goal is the same.” He stated that efforts for Korean reunification should be carried out while following the rules of the international community, with North Korea following official procedures to dispose of its weapons of mass destruction, and argued, “If South Korea does not change its attitude, we will move no closer to getting rid of this powder keg in East Asia.”

In an article in the Yomiuri Shimbun titled “Legal foundation of Japan-South Korea relations rendered meaningless,” former Justice of the Supreme Court of Japan Hiroshi Fukuda commented on the decision by the Supreme Court of South Korea ordering Japanese companies to pay compensation to forced laborers they used during World War II, arguing from his position as someone involved in the negotiations on the 1965 Agreement Between Japan and the Republic of Korea Concerning the Settlement of Problems in Regard to Property and Claims and Economic Cooperation, “There are major problems with this decision which cannot be overlooked.”

The first reason he gave is that the 1965 agreement states that “problems concerning property, rights, and interests…have been settled completely and finally,” and also that “no claims shall be made.” Fukuda argued, “This would be making all the efforts made by parties in both Japan and South Korea to ensure this agreement was signed meaningless.”

The second reason he gave is that this agreement was carried out through a lump-sum agreement, which are used internationally for the settlement of claims, and part of the agreement is not becoming involved in handling individual claims. Fukuda noted that this is why the issue of claims was included along with economic cooperation in a package deal for a total sum of 500,000,000 USD, in an attempt at compromise. If they nevertheless attempt to address individual claims over 50 years after the agreement was signed, he warned, “This would render the basis of the settlement agreement, and by extension the normalization of Japan-South Korea relations, meaningless>.”

The third reason he gave is that the right to make claims goes both ways, and if the right to make individual claims is recognized then there is a risk that claims will be made for the over 300 Japanese fishing boats and 3000 people seized from 1952 to 1965, after South Korea’s unilateral declaration of the Syngman Rhee Line, which was illegal under international law. Fukuda also noted that with this decision by the Supreme Court of South Korea, “There is also a major problem when considering that the judicial branch overturned a decision by the executive branch of government, which has authority over foreign policy.” He stated that this is because a key principle of international law is that domestic reasons cannot be used to escape international legal obligations.