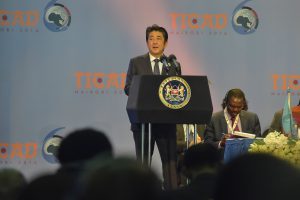 In an essay in Gaiko titled “The position of a ‘Free and Open Indo-Pacific’ in Japanese foreign policy,” Professor Hiroshi Nakanishi of Kyoto University explained that Japan was the first to propose the regional concept of a Free and Open Indo-Pacific (FOIP) at the government level, beginning with Prime Minister Shinzo Abe’s keynote speech in August 2016 at the sixth Tokyo International Conference on African Development (TICAD) held in Nairobi. He stressed that the reason for a “growing awareness of the Indo-Pacific” was that after the 2008 Beijing Olympics and the global financial crisis, China began working towards “the construction of a Chinese-led international order which risked conflict with the Western-led international order.” Nakanishi provided his analysis that in Japan in particular, interest in maritime security grew due to incidents in 2010 with Chinese fishing boats operating near the Senkaku Islands, and with the English essay titled “Asia's Democratic Security Diamond” which Abe released in 2012 after returning to power, there was a stronger movement towards a strategy based on maritime security cooperation in the Indo-Pacific region.

Although the term “Indo-Pacific” was not used in Abe’s essay, Nakanishi argued that the sentence, “I envisage a strategy whereby Australia, India, Japan, and the US state of Hawaii form a diamond to safeguard the maritime commons stretching from the Indian Ocean region to the western Pacific,” contributed to the creation of the concept of FOIP. The Trump administration declaring at the end of 2017 that a free and open Indo-Pacific has been in America’s interests since the founding of the country, along with the US Armed Forces renaming US Pacific Command to US Indo-Pacific Command at the end of May 2018, demonstrated the level of strategic interest in the FOIP strategy.

Nakanishi stated that FOIP is not just a policy unique to Japan and the US, but “a group of policies with a more persistent foundation and direction.” Specifically, he listed three policies: 1) The creation of a large economic zone including economic cooperation, based on a free-market economy; 2) Maintaining and strengthening a regional order and framework sharing universal values including the rule of law, liberal democracy, and human rights; 3) Preservation of maritime security based on freedom of navigation.

However, Nakanishi also noted that FOIP has issues, “It includes a lot of vagueness, and is not yet mature enough to call a policy system,” and that US–China relations were the biggest source of uncertainty. Stating that since if the US and China move towards a cold war, FOIP policies may “change to policies establishing divisions,” Nakanishi argued, “Japanese foreign policy should work to avoid this situation.”

In an interview in Gaiko titled “Build a success story in the Indo-Pacific,” Mr. Shigeki Takizaki, Director-General of the Southeast and Southwest Asian Affairs Department of the Asian and Oceanian Affairs Bureau of the Ministry of Foreign Affairs of Japan, argued that “FOIP is a comprehensive concept, and is not targeting any specific country.” Specifically, he stated, “No one is interested in competing with the One Belt One Road” policy of China in Southeast Asia, where there is a massive demand for infrastructure, and explained, “At the Japan-China Summit Meeting held on October 26, 2018, both countries agreed to support private economic cooperation in other countries.” However, Takizaki also added, “This does not mean we will be cooperating on One Belt One Road.” He stated that the conditions for private economic cooperation between Japan and China is nothing more than “whether international standards are being met.”

Speaking on the future of the FOIP strategy, while indicating plans to spread throughout the region the values and ideals which form the base of what Japan has done so far, Takizaki mentioned how regional prosperity was achieved by increasing connectivity through many years of infrastructure development in both Japan and Southeast Asia. He argued the necessity of taking a multilateral and multilayered approach to “spread this success story to Southern Asia, the Middle East, and Eastern Africa.”

In a piece titled “Make the Indo-Pacific freer, more open,” which ran in the Yomiuri Shimbun, Japan International Cooperation Agency President Shinichi Kitaoka indicated his opinion that a free and open Indo-Pacific was “a matter of life or death” for Japan, and declared, “It is not a strategy,” but instead, “A goal or vision behind many policies.” Therefore, he argued that the Japanese government having recently changed to referring to a FOIP “framework” as being “more accurate in the first place.”

Kitaoka noted that China’s One Belt One Road initiative is an accumulation of infrastructure construction projects in nearby countries and is “connected to expanding Chinese influence,” stating, “It is very different from a framework for a free and open Indo-Pacific.” He approved of the four conditions the Prime Minister Abe gave in June 2017 for cooperating with the One Belt One Road initiative as “essentially making the One Belt One Road harmless.” Those conditions were: 1) Infrastructure open to use by all; 2) Procurement that is transparent and fair; 3) Projects that are economically viable; and 4) The soundness of the debtor nation's finances is not to be harmed.

While stating that moving forward, “Japan will be able to avoid direct conflict with China while also resisting China through the support of independence and development in neighboring countries,” Kitaoka also argued that with conflict continuing between China and the US, “Of course Japan will be on the same side as the US for many points, but it is important for the potential for partial cooperation to be left intact, working to render Chinese foreign policy harmless while waiting for the country to change.”