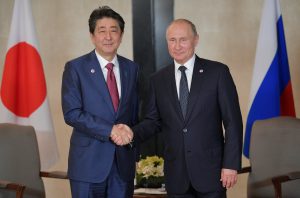 On November 14, 2018, at a Japan-Russia summit meeting held in Singapore, Prime Minister Shinzo Abe and President Vladimir Putin agreed to accelerate negotiations on a Japan-Russia peace treaty. In a discussion between Masaru Sato (author and former Ministry of Foreign Affairs chief analyst) and Kazuhiko Togo (Kyoto Sangyo University professor) in the December issue of Chuokoron titled “This is the last chance to have the Northern Territories returned,” Sato stated his opinion that these talks would be the last chance. Commenting on signing a peace treaty, Sato said, “Making a peace treaty is realistic, and if this chance is lost, then Japan will lose Habomai and Shikotan as well and end with zero.”

Analyzing Putin’s comments, Sato stated, “He seems to be indicating he is at least willing to hand over Habomai and Shikotan,” and gave three reasons for why Russia began to take action. The first, related to Russia’s annexation of Crimea in Ukraine: “If a Japan-Russia peace treaty is made, it will have the effect of Japan recognizing Crimea as Russian territory.” The second reason is that if Japan and Russia cooperate regarding the situation in the Korean Peninsula, then they could change the trend from talks between four nations with both Koreas, the US, and China, and have talks between six nations, thus being able to take an active role in stability in Northeast Asia. The third reason is that Russia can gain access to northern sea lanes, with a peace treaty allowing Russian vessels to pass through Japanese straits such as Soya, Tsugaru, and Tsushima.

With the power struggle between the US and China becoming more fierce, Togo stated that “Working with Russia now will definitely increase Japan’s diplomatic power,” noting his belief that the increasingly unstable international situation would help support talks on a Japan-Russia peace treaty. In particular, he emphasized that while Russia is trying to maintain relations with Xi Jinping’s China, it is also trying to avoid China becoming a security threat to Russia in the mid- to long-term: “This is a rare opportunity with so many factors working to draw Japan and Russia closer together.”

In an essay titled “Current situation and future outlook of Japan-Russia relations from a security perspective” in volume 51 of Gaiko, Shinji Hyodo (head of the National Institute for Defense Studies Regional Studies Department) stated that Putin’s comments on signing a peace treaty were made because “Russia does not want to become nothing more than a junior partner to China,” and in order to adjust their policy of being anti-US and pro-China, “The relative importance given to Japan is increasing.” The Japan-Russia foreign and defense minister meetings (2+2) having resumed in March 2017 and efforts to improve relations with Japan, India, and Vietnam are due to the rise of China being a possible threat to Russia according to Hyodo, and he commented, “The importance Russia places on Japan, in security and other areas, will likely continue to increase.”

However, regarding the economic cooperation in the Northern Territories islands that Japan is pursuing, Hyodo noted, “The opinion that economic cooperation will lead to the islands being returned is not going to work with Russia, where the territory issue is considered to be essentially about security.”

Hyodo also commented on how North Korea has been brought up as an important issue at recent Japan-Russia summit meetings. With Russia's relations between U.S. and China rapidly changing, Hyodo argued, “The key to accelerating peace treaty talks is to continue Japan-Russia discussions about security, and work together to find common interests in the security of East Asia.”