Issues with Policy to Bring in More Foreign Workers 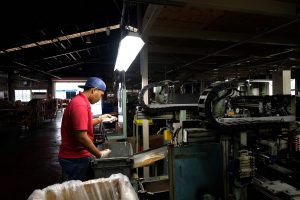 In an interview titled “Is a Japanese-style society with immigration possible?” in the December issue of Sekai, Hidenori Sakanaka (director of the Japan Immigration Policy Institute and former head of the Tokyo Regional Immigration Bureau), commenting in relation to the policy to accept more foreign workers, argued that the only way to solve the various issues stemming from a period of drastic population decline was through immigration policy. If foreigners are brought in only as temporary labor, they will return to their home country at some point, and attempting to solve the serious labor shortage with the Technical Intern Training Program and by allowing foreign students to work “would be purely negative, with no benefits.” In particular, Sakanaka insisted that “labor under the name of training” must not be allowed, and called for the Technical Intern Training Program to be eliminated as soon as possible. Also, stating that the government’s new direction of allowing only highly-skilled foreigners to live in Japan permanently and have their family join them is “functionally a shift to a immigration policy,” he stressed that “a national debate should be held to determine agreement” with this historic shift in a basic policy of the nation.

Sakanaka also declared that it was possible for Japan to take in 10 million immigrants over the next 50 years. Increasing the percentage of permanent foreign residents (immigrants) from the current incredibly low 1% of the total population to 10% would still be a lower percentage than current levels in U.K., Germany, or France, and therefore realistic.

Speaking of a future “Japanese-style society with immigration,” Sakanaka defined it as “a society that emphasizes Japanese wa (harmony) while ensuring social inclusion through policy.” He also called for: 1) Establishing an Immigration Law, 2) Creating a Ministry of Immigration and a Minister of Immigration position within the Cabinet as a government agency to handle immigration, 3) Revising the Nationality Law to allow for dual nationalities, and 4) Looking into allowing children born in Japan to foreign parents to acquire Japanese citizenship, and other measures.

In an essay titled “Examining the foreigner policy in postwar Japan, and despairing for the present” in the December issue of Sekai, Hitotsubashi University Professor Emeritus Hiroshi Tanaka looked at Japan’s policy on foreigners after World War II, and argued, “There is no indication of the direction of the policy to accept foreign workers upfront and build a multiethnic and multicultural society. As an example, he mentioned the sudden increase in foreign workers of Japanese descent working in the automobile industry after immigration laws were revised in 1990, and stated that it showed how warped the foreigner policy was: “These people were allowed to enter and stay in Japan based on a blood relation to the Japanese, and so this was completely separate from how foreign workers would normally be accepted.” He stated that another indication of warped policy was the Technical Intern Training Program implemented in 1993 with the goal of “international contribution,” which allowed foreigners who have entered Japan on a training visa to switch to a designated activities visa and work legally, as this was carried out through a notice by the Ministry of Justice instead of by revising immigration laws.

Tanaka noted that the reasoning of “international contribution” has vanished from the new bills for immigration law reform, and that although it has been noted this is a policy reflecting the domestic issue of a labor shortage, the category of “specific skills” has just been added on top of the existing “technical training,” which he criticized as simply grafting “specific skills” onto the existing law.

In a roundtable discussion in the November issue of Bungeishunju titled “Immigration policy of a lost nation,” Haruaki Deguchi (president of Ritsumeikan Asia Pacific University), Toshihiro Menju (managing director of the Japan Center for International Exchange), and Masashi Kawai (journalist) indicated concerns over the influx of 390,000 foreigners in 2015, with Menju stating, “There are some saying Japan is secretly a country with mass immigration.” There are approximately 2.56 million foreign residents in Japan, consisting of 1.08 million permanent residents and special permanent residents, 310,000 foreign students, 270,000 technical interns, and 180,000 long-term residents including people of Japanese descent, but they noted, “There are very few highly-skilled workers, which we would like more of.”

Deguchi stated that the underlying cause behind accepting foreign students as labor was the 2008 Fukuda administration’s plan with a target of 300,000 foreign students. He criticized how students at Japanese language schools were newly classified as foreign students, criticizing how they became “fronts for unskilled labor” with low salaries and poor work conditions, and argued, “The only country in the world that is relying on foreign students for unskilled labor is Japan.” Kawai noted that the new immigration law reforms would increase the number of permanent foreign residents in Japan, and so it would become necessary to approach the issue of voting rights for permanent residents, an issue which has existed for years.