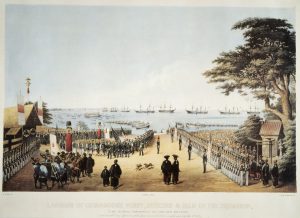 150 Years after the Meiji Restoration:

In a conversation in Chuokoron with Atomi University Professor Hiroshi Mitani, the University of Tokyo Professor Tadashi Karube noted, “There is a significant gap between the commonly held historical perspective, and the accepted perspective among historians,” referring to the Meiji Restoration, which took place 150 years ago in 1868. Mitani stated that one misunderstanding was that in the final year of the Tokugawa shogunate (1867), Japan was split between two opposing factions: sabaku (supporters of the shogunate) and kinno (supporters of the emperor). He emphasized, “This is a major misunderstanding. In reality, after control of the country was returned to the emperor, two factions were formed and being fighting: a faction supporting the Tokugawa family playing a central role in restoring imperial rule, and a faction seeking to eliminate Tokugawa as part of the restoration.

In a conversion in Chuokoron with Hitotsubashi University Professor Chiaki Moriguchi, the University of Tokyo Professor Masaki Nakabayashi argued that instead of the common theory that Japan’s modern economic development began after the Meiji Restoration, “Economic growth had already begun in the late Edo period.” He also emphasized that the major reforms after the Meiji Restoration were brought about by “abolition of the class system.”

Moriguchi noted that in the late Edo period from the 18th century onward, even as productivity increased the population had peaked at 30 million, and as a result the standard of living began to increase. Introducing Nakabayashi’s estimates of effective tax rates, she noted that although approximately 40% of agricultural production was taxed at the beginning of the Edo shogunate, by the late Edo period the rate was less than 30%. This demonstrated the findings of economic history research in recent years that the standard image of the Edo period of “farmers struggling under heavy taxes” is not necessarily accurate. Moriguchi explained that in the economic history of Western Europe, which unlike Japan involved basically constant wars, war is considered a driving force in forming modern nations and for technological development, so it is even considered positive. In contrast to Western Europe, which had a system to maximize innovation through competition, the han feudal domain system of Japan including an isolationist foreign policy, class system, and decentralized military system was a system that minimized competition and prioritized stability and peace. Therefore, when Japan opened its borders, the Western powers had an overwhelming military and economic advantage. Moriguchi also argued that it was “a kind of miracle” that Japan avoided being colonized in the late Edo period despite pressure from Western European countries, as Japan modernized in the brief period while England and France were focused on China, and the US was embroiled in civil war. In response, Nakabayashi suggested that one major factor in Japan avoiding colonization was that “During the Edo period, Mitogaku and Norinaga Motoori had already spread national education among the townspeople, and people had begun to feel as though they were part of the same country, with a national consciousness starting to grow.”