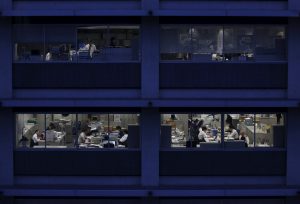 In a conversation in Chuokoron with Hiroki Komazaki, Director of certified NPO Florence, the University of Tokyo Professor and Council for the Realization of Work Style Reform member Yuichiro Mizumachi argued that for the work style reforms being pushed by the Abe government, “The negative aspects of Japan’s employment systems need to be fundamentally changed,” and noted that long working hours and inequality between regular and non-regular workers were the most important issues to be corrected. He emphasized that if these measures could be carried out, “It would be one of the most important reforms to post-war labor laws.”

For correcting long working hours, Mizumachi stated that the key would be whether limits on overtime work are followed. The work style reform legislation limits overtime to less than 100 hours per month, with a monthly average of no more than 80 hours, and 720 hours per year, but Mizumachi argued the most difficult regulation for businesses to follow will be having only 45 hours of overtime per month in principle, and only surpassing this limit six times. He stated that in order to carry out these reforms, it would be essential “to normalize the idea of working no more than two hours of overtime a day among all employees.”

For correcting the inequality between regular and non-regular workers, Mizumachi stated that there was a misunderstanding that “equal pay for equal work” just meant “paying the same salary to regular and non-regular workers,” and a misconception that “problems can be avoided by separating job duties.” He also noted issues in dealing with regulating and managing working hours, such as how secondary jobs would be handled, and how health management would be carried out in that case. Mizumachi commented, “Although managing working hours is effective for secondary industries, for the service industry, stress management is necessary as well.”

In an essay in Chuokoron, the University of Tokyo Associate Professor Jun Nakahara analyzed the chronic state of overtime work in Japan based on the “Overtime Study of Hope” work style report (with 6,000 respondents throughout Japan). The study was a joint project by Nakahara and Persol Research and Consulting, and he explained that “Hope” was included in the name of the study because he “felt nothing but despair” from the work style reforms calling for “meeting deadlines and quotas without working overtime.” Mentioning that according to a study by Gallup, only 6% of workers in Japan feel engaged in their work, Nakahara stressed, “This is because despite Japanese people being hard workers and working long hours, they have a shocking lack of passion.”

Nakahara analyzed the mechanisms that cause overtime as having the features of concentration, infection, paralyzation, and inheritance. “Concentration” refers to competent workers tending to work more overtime, with Nakahara stating, “Since the 2000s, as organizations flattened and introduced performance-based systems, work has tended to concentrate more around specific individuals.” He also argued that increased overtime tended to spread like an infection in the workplace, spreading due to issues such as “people who leave early being considered uncooperative.”

According to Nakahara, “paralyzation” refers to “a situation in which consistent actions and awareness cannot be maintained, due to distortions of self-perception caused by long working hours.” He described “inheritance” as the trend of people working under management who themselves worked long hours of overtime in their youth tending to work more overtime, noting that some of those people have no concept of “overtime” or “the boundary between working hours and overtime.”

Nakahara gave three suggestions for improving long overtime hours: 1) Implementing company-wide policies such as “No Overtime Day” or eliminating overtime in principle and requiring permission in advance to work overtime; 2) Improving workplace management by clarifying and accelerating directions and decisions; 3) Changing individuals’ attitudes. He argued, “Overtime will not decrease just by calling for it to decrease,” and stated that more fundamental corrections including improving the wage system are necessary.