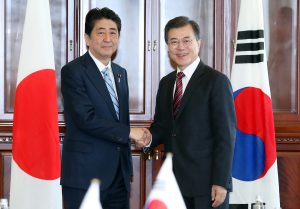 ■ Kan Kimura, “Reneging on the comfort women agreement: the disease that is South Korea,” Bungeishunju, March

In an essay in Bungeishunju, Kobe University Professor Kan Kimura stated that South Korean President Moon Jae-in’s comments on wanting to take a new direction with the Japan-South Korea agreement on comfort women effectively amounted to scrapping the agreement, and critically noted, “Diplomacy cannot be carried out if deals are changed whenever the government changes.” Kimura explained that the reason for Moon’s stance is South Korea’s direct democracy way of thinking that “justice is more important than the law,” noting, “In South Korea, once public opinion decides what justice should be, it is expected the government will act accordingly, and it is difficult to argue against it.” However, Kimura also noted that this style of democracy is not entirely unique to South Korea, and suggested that it was a forerunner of the populist movements in the US, the UK, and European countries.

Kimura also stated that the Japan-South Korean agreement reached in December 2015 was made with the US placing pressure on former South Korean President Park Geun-hye for her increased shift to China, with South Korea “forced into a position where they had to show results for the comfort women issue.” However, he commented that the Moon administration’s investigation of the negotiation process for the agreement was “a major mistake,” arguing that Moon calling for further action on the agreement “has severely damaged international trust in South Korean diplomacy.”

As South Korea announced they would not abandon or renegotiate the agreement, Kimura stated that “Japan can continue pushing for South Korea with persistence to fulfill the Japan-South Korean agreement.” He noted that the problem is that “the comfort women issue is not a high priority” for the Moon administration, and that there are multiple challenges including the “Comfort Women Day” (August 14) established by the Korean government, and the removal of statues commemorating comfort women placed in front of Japanese embassies. Kimura further commented that there has never been a South Korean government less concerned with Japan-South Korean relations than the Moon administration is, and emphasized that South Korea “has no issues with Japan-South Korean relations remaining in gridlock.” Therefore, Kimura argued that in order to have the Japan-South Korean agreement bear fruit, “ceaseless diplomatic efforts are necessary to ensure the US and international society act as Japan’s allies.”