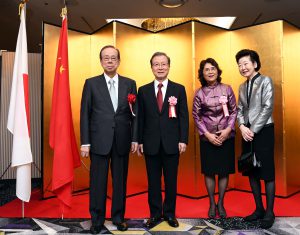 “45th anniversary of normalization: Looking forward to a path for cooperation between Japan and China,” Gaiko, Vol. 46

In an interview in Gaiko, Liberal Democratic Party Vice-President Masahiko Komura looked back on the diplomatic relationship of Japan and China on the occasion of the 45th anniversary of the normalization of relations, and in a return to the original intent of his predecessors who succeeded in normalizing relations, he called for further diplomatic efforts from both countries to “make the ideal of a ‘Mutually Beneficial Relationship Based on Common Strategic Interests’ into reality.” Commenting on historical issues, which remain a major source of conflict between Japan and China, he noted how former Prime Minister Junichiro Koizumi’s visit to Yasukuni Shrine (August 2001) created tension between the two countries: “It is unfortunate that Koizumi’s visit to Yasukuni stole the momentum of the ‘new thinking’ movement within China of focusing on the future, and weakened the position of President Hu Jintao, who was seen as being relatively pro-Japanese.”

Komura stated that a “Mutually Beneficial Relationship Based on Common Strategic Interests” is about Japan and China working together to contribute to the Asian region and international society as a whole, and commented on China’s efforts to create an Asian Infrastructure Investment Bank (AIIB) and its One Belt, One Road initiative: “Fundamentally, these efforts are based on a stance of contributing to international society, so it is important for Japan to respect their positive efforts, and be willing to cooperate.” Komura also gave his thoughts regarding the AIIB, which Japan is currently outside of the framework for: “If there is a possibility that China will prepare international standards, Japan’s participation should not be eliminated.”

“Return to the original spirit of the normalization of relations between Japan and China,” Chuokoron, January

Former Ambassador to China Yuji Miyamoto, as part of a roundtable discussion by Japanese and Chinese experts in Chuokoron, stated that the 45th anniversary of the normalization of bilateral relations “should be considered positively, and there is no need to be pessimistic about the future either.” Miyamoto explained the “four political documents” considered to be the foundation for Japan-China relations: The 1972 Japan-China Joint Communiqué, the 1978 Treaty of Peace and Friendship between Japan and China, the 1998 Japan-China Joint Declaration, and the 2008 Japan-China Joint Statement on Comprehensive Promotion of a "Mutually Beneficial Relationship Based on Common Strategic Interests." Considering the current situation of the two countries, he suggested, “Creating a new framework for the next 45 years may be a good idea,” and commented on the need for a fifth document indicating a new direction for bilateral relations.

Specifically, Miyamoto proposed that the fifth document should “include security issues as one of its foundations, and create a strategic framework that will lead to mid-to-long-term stability in both countries.”

In response, People's Daily editorial writer Ma Licheng stated that the biggest success of these 45 years had been the creation of the four political documents, commenting, “They are very reassuring. We must continue to value them moving forward.” He agreed on the creation of a fifth document, due to 1) the current regression of globalism, 2) Japan and China’s shared security interests regarding the issue of nuclear weapons on the Korean Peninsula, and 3) new trade and economic exchange problems have been arising between Japan and China.

University of Tokyo Professor Akio Takahara indicated concerns over recent Japan-China relations: “Misperceptions and lack of understanding between the citizens of both countries are extreme, and I believe they have reached dangerous levels.” Regarding the Senkaku and Yasukuni issues remaining unresolved for decades, he argued, “We must look back, analyze what the problem is, and reflect on whatever points are deserving of it.”

Beijing Jindu Art Center Director Rong Jian, discussing the three issues of the Senkaku Islands, Yasukuni Shrine, and history, suggested that looking back at the past ten years of bilateral relations, without solving these three issues and the issue of constitutional reform, which has also caused a major backlash in China recently, “There can be no progress beyond an abstract argument for friendship.” He also emphasized that the most important experiences of China were “Peace and development, which are truly the themes of the age.”

In an interview in Bungeishunju, former Prime Minister Yasuo Fukuda argued that to improve Japan-China relations, China should not be approached from the attitude that “the Chinese economy will only grow bigger, so we should get close with them,” but instead “hoping to create a relationship with constant communication in every aspect, in which it is only natural to want to cooperate with each other.” He emphasized that, for geographical and other reasons, “Japan cannot move forward with a close relationship with the U.S. only.”

On the issues with North Korea, Fukuda commented, “There is no possibility of Prime Minister Abe visiting North Korea as things stand.” He stated that the key to solving these issues lies with China, and argued that “There is no way to move forward from the current situation without determining a direction” through discussions between China and the U.S., which has troops stationed in South Korea.

Regarding the current state of Japan-South Korea relations, he commented that considering the dangerous situation of North Korea, “It is extremely unfortunate that Japan and South Korea are continuing to engage in pointless conflict, and so unable to get along politically.” There are high hopes in South Korea for a visit by the Japanese emperor, but Fukuda declared that there was no chance of that happening without improved bilateral relations: “It is the responsibility of politics to create a situation in which that debate can be carried out without worry, and the order must not be reversed.”