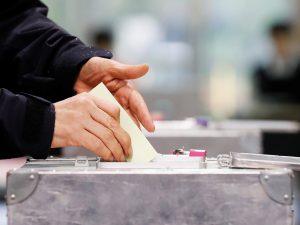 In an essay in Sekai, Keio University Professor Eiji Oguma argues that the reason the Liberal Democratic Party and Komeito coalition won successive victories in national elections since 2012 is due to both a structure of “30% right, 20% left, and 50% centrist,” and to “a decrease in voter turnout.” According to Oguma, this ratio of 3:2:5, which is said to have been described by someone in Prime Minister Shinzo Abe’s circle, was not noticeable before 2011. However, since the 2012 House of Representatives election: 1) The 3:2:5 structure became obvious, and a voter turnout of around 50% became standard, and 2) While there is a stable number of total conservative votes, support for the Democratic Party of Japan (now the Democratic Party) plummeted after their failure at running the government, and so the number of independents voting for liberal parties decreased, and non-voters increased.

Oguma states that “non-LDP and non-liberal” parties, which can be the deciding factor in an election, can only receive at most around 10% of votes (10 million). In the 2017 general election, the Party of Hope and Nippon Ishin no Kai together received 13% of votes, but Oguma argues that even if this 10% all went to the same party, “It would never be able to grow beyond a minor party, and would not lead to any major changes to the current situation.” Therefore, Oguma plainly states that Tokyo Governor Yuriko Koike’s plan to eliminate the liberals and create another major conservative party to combat the LDP is “impossible for the time being,” and he argues that the only chance for a change in government, such as occurred with the DPJ victory in 2009, is “by having independents add their votes to the liberal 20%.”

Oguma also argues that the reason for the DPJ loss in the 2012 general election is not because the conservative alliance gained more votes, but due to “an explosion of opposition parties, with new parties appearing and disappearing rapidly much like they did in the 1990s, and due to a further increase in non-voters.” He notes that the stability of the LDP-Komeito coalition is “supported by mass abstention from voting, and not by any strong faith.” He also criticized the recent flood of new parties, arguing, “Forming new parties only confuses voters, leading to lower voter turnout and benefiting the conservative alliance.”