Will an Age of Electric Vehicles Arrive? 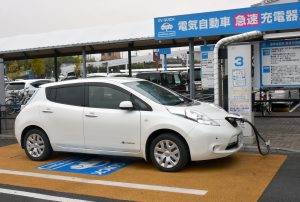 In an article in Sekai, environmental journalist Shoji Ozawa notes two major reasons for why electric vehicles (EV) have jumped to the lead of the competition for next-generation eco-friendly vehicles: 1) Both France and the UK have announced plans to ban the sale of fossil-fuel vehicles by 2040, 2) China will require automakers to ensure new energy vehicles (NEV) account for at least 10 percent of automobiles manufactured and sold (including imports) starting in 2019. The superficial reasons given for these plans are to fight climate change, but Ozawa states the real reasons are to “try to take control of the market for next generation vehicles.”

With EVs having only about two-thirds the number of parts that gasoline vehicles have, and automakers that entered the market later having no ties to parts manufacturers, Ozawa emphasizes that China is aiming to “quickly take the lead for EVs.” He mentions a major reason for the accelerated adoption of EVs in Europe is the 2015 diesel-emission scandal by German automaker Volkswagen, after which they announced a shift to increase the ratio of EVs and plug-in hybrid electric vehicles (PHEV) they manufacture from the current 1% to 25% by 2025.

On the other hand, Ozawa states that while Toyota is accelerating its development and sales of EVs, due to having positioned fuel-cell vehicles (FCV) as the ‘ultimate eco-friendly car’ in their research, “If EV batteries have a long range and can be charged quickly, FCVs would lose their advantages over EVs.”

Ozawa also mentioned that coal is the main power source in China and India, so although they are focusing on EV research, “If the number of coal power plants is increased in order to supply electricity for EVs, then CO2 emissions could actually increase.” He argued that if the emphasis is environmental friendliness, then the issue of power sources has to be considered as part of EV research.

■Hisao Inoue, “China will have a hegemony in electric vehicles,” Bungeishunju, December

In a report in Bungeishunju, journalist Hisao Inoue warns that China may steal the lead when it comes to EVs, which are now considered the most likely candidate for next-generation eco-friendly vehicles. He states that China is “intentionally trying to change the ‘rules of competition’ for the automobile industry,” arguing that with the new Mid- and Long-Term Development Plan for the Automobile Industry announced by China in April 2017, “China will become a leading country in the automobile industry within 10 years.” Regarding the fact that China limited the types of new energy vehicles it would promote to EVs, PHVs, and FCVs, and did not include the hybrid vehicles (HV) which Toyota has been developing and selling, Inoue notes with concern that “There is an important reason for that.” Inoue comments that the decision this summer to ban in principle all new construction of factories for gasoline vehicles shows China “is ready to commit as a nation.”

Inoue also provides his analysis that Volkswagen, which had no choice but to shift to EVs due to its scandal, jumping on board China’s national strategy as a perfectly timed opportunity will be a major factor in accelerating EV development. Inoue notes that 40% of VW’s global sales are in the Chinese market, and “China’s shift to EVs matched with VW’s strategy.”

Inoue argues that Japanese automakers such as Toyota and Honda are focusing too much on HVs, and that as soon as it seemed that HVs might be removed from China’s list of new energy vehicles, “Japan should have created a ‘counter scenario,’ and globally promoted the benefits of HVs…. If a plan to respond is not created, Japan will fall behind.”