Nursing Care for Seniors and Seniors in the Workforce 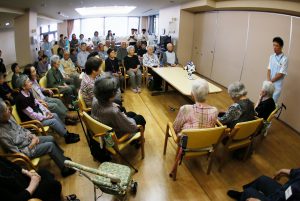 In an essay in Chuokoron, medical and nursing-care journalist Miyo Nagaoka writes that although with the arrival of an aging society in Japan, at one point there were 520,000 people waiting for a spot in an intensive-care nursing home, recently those homes “have not been able to find enough residents, and are below capacity…. About 26% of intensive-care nursing homes have vacancies, and new facilities taking an average of 5.8 months to fill up.” She notes the main reason for this is that from fiscal year 2015, residents were limited in principle to moderate to severe cases categorized as “requiring care level 3” or above. She states that a study on nursing homes, including intensive-care homes, carried out by 120 local governments across Japan found that “Nursing homes in general are facing a crisis, and the continued existence of the nursing care industry is in danger.”

She also indicates another reason for intensive-care nursing homes being below capacity is that with the national government providing subsidies for the construction of civilian nursing homes (“residences for seniors with services included”), 220,000 have been built across Japan in the six years since the program began. Furthermore, these nursing homes vary significantly in quality, and Nagaoka notes the problem that “Since they do not have the same personnel standards as nursing care facilities, there is no guarantee the number of staff will be appropriate for the number of residents and their health situations.” She also points out that the nursing care industry is suffering from a significant labor shortage, and when looking at a breakdown of bankruptcies by industries, 19 senior welfare businesses went bankrupt from January 2013 to June 2017 due to a shortage of workers, more than any other industry during that timeframe.

On the excessive supply of nursing homes, which has surpassed the number of people certified as being in need of care, Nagaoka is critical: “Although a response to the aging of the baby boomers is urgent, just building an excess of facilities first without taking into account the current situation will not only lead to an even worse labor shortage, it could also have a negative impact on public finances.”

■Toshiaki Tachibanaki, Junya Ishimoto, “How can the labor shortage be solved,” Chuokoron, November

In a discussion which ran in Chuokoron with Japan Association of Certified Care Workers Chairman Junya Ishimoto, Kyoto Women’s University Visiting Professor Toshiaki Tachibanaki notes that although the jobs-to-applicants ratio for nursing care workers is high at 3.56 (as of July 2017), workers cannot be found to fill positions, and the retention rate is also extremely low, warning of a critical labor shortage in the nursing care industry.

To solve the labor shortage, Tachibanaki has three suggestions: 1) Increase wages for nursing care workers, 2) Hire more workers in their 50s and 60s, and 3) (As suggested by Ishimoto) increase appreciation for the specialization of certified care workers. He also notes the necessity for foreign workers in nursing homes, but argues “the certification requirements are too strict,” and suggests that as long as they can speak some Japanese, the number of foreign nursing care workers should be increased. He also states that to increase compensation for nursing care workers, the three options are insurance premiums, taxes, or having users carry the burden, but argues, “As an economist, I believe welfare and social security should mainly be supported by taxes…. I would like to see taxes applied to nursing care, to increase the rate of compensation.”

Tachibanaki proposes that in order to increase the amount collected for nursing-care insurance premiums, there should be a serious debate about lowering the age they begin to be collected at to 40. At the same time, he notes, “Unlike pension or medical payments, the majority of citizens will not benefit from this system,” and so argues the necessity of economists such as himself convincing the 80% of people who will not be seeing a return that “That is just how insurance works.”

In an article in Bungeishunju, local government journalist Taro Hagami writes about the increased use of “silver human resources” as another aspect of Japan’s aging society, reporting on successful examples of unique services throughout the country. Silver Human Resources Centers are corporations established in principle at the municipality level in order to provide seniors with purpose, where residents 60 years old or over can register to find low-paying work. As of the end of the 2015 fiscal year, there were 1324 of the centers, with around 720,000 people registered.

One successful example Hagami introduces is tour guides for the Yokai [Japanese monsters] Legend Tour by the Silver Human Resources Center in Kawagoe, Saitama. This tour of Kawagoe, which is famous for its yokai legends, was established in 1986, and requires guides to pass a difficult interview. Currently this tour is led by 36 guides up to the age of 80. According to Hagami, in order to become a guide, “One year of unpaid training is necessary, before taking a test to become a guide.”

Other examples he introduces are a group that listens to people’s problems in Ashiya, Hyogo, and seniors providing language or gardening lessons based on their work experience. Hagami states, “Silver Human Resources Centers are interesting. They reconnect people who have been released from their first life. The centers can be used as a place to make a little money through light work, or to search for new possibilities.”