Arguments Calling for a Revision of the Three Non-Nuclear Principles 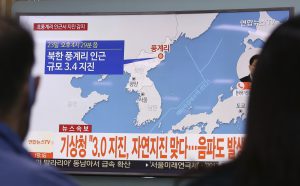 ■Shigeru Ishiba, “Debate over every possibility is necessary, from bringing them into the country to joint possession,” Chuokoron, November

With North Korea’s nuclear weapons development program and missile tests, the security environment surrounding Japan is growing increasingly severe. In an essay in Chuokoron, former Minister of Defense Shigeru Ishiba argues for the necessity of debate regarding Japan’s Three Non-Nuclear Principles (not possessing, not producing and not permitting the introduction of nuclear weapons into Japanese territory), from the issue of having nuclear weapons brought onto American military bases in Japan, to the possibility of joint possession.

Ishiba states that while Japan has operated with the Three Non-Nuclear Principles as a part of national policy, “If you include ‘not discussing’ nuclear weapons, there are essentially four principles.” Considering the current situation in North Korea, he also argues for the necessity of “reexamining whether Japan can be sufficiently protected” by the American nuclear umbrella based on the Japan-US alliance. In particular, he calls for debate over expanding the possibilities of the principle to “not permit the introduction into Japan” of nuclear weapons: “What about bringing nuclear missiles into American bases in Japan and deploying them there? Joint possession through nuclear sharing could be another way. In-depth examination is necessary to reach a conclusion.”

On the topic of whether Japan has the capability to create nuclear weapons, Ishiba states, “Without the land to carry out implosion experiments, and with the experiences of the atomic bombings of Hiroshima and Nagasaki, and lessons of the Fukushima nuclear accident, it would be very difficult for Japan to create nuclear weapons refined to a level usable as weapons.”

■Ryozo Kato, “Aren’t the Three Non-Nuclear Principles ‘not possessing, not producing and not permitting being attacked by nuclear weapons,’” Gaiko, Vol.45

In an essay in Gaiko, former Ambassador to the United States Ryozo Kato states “calls for Japanese nuclear armament have been surfacing in the US as well,” mentioning comments by Kissinger, Scowcroft, and William Perry, and argues that no matter what the US’s response is, “It is still too early for Japan to arm itself with nuclear weapons.” He describes Japan possessing nuclear weapons as “a massive process, requiring persistence and decisiveness, when looked at realistically,” and also notes concerns that the process could shake the foundations of Japan’s security.

On the topic of the third Non-Nuclear Principle of “not permitting nuclear weapons into Japan,” Kato argues, “Considering Japan’s position as the only country to have been attacked with nuclear weapons, the third principle should be ‘not being attacked by nuclear weapons’ or ‘not permitting being attacked by nuclear weapons.’” He states that if this issue cannot be debated, “That would mean that Japan has taboos which are not appropriate for a liberal democracy,” and argues that in addition to preparing for military threats, improving Japan’s resistance to ‘political intimidation’ from neighboring countries through debate on reviewing the Three Non-Nuclear Principles is necessary for Japan to be independent.

■Tsuneo Watanabe, Jun Sakurada, “How should the nuclear armament of Japan be debated,” Chuokoron, November

In a series of letters between Toyo Gakuen University Professor Jun Sakurada and Sasakawa Peace Foundation Senior Fellow Tsuneo Watanabe which ran in Chuokoron, Sakurada states, “Choosing to arm Japan with nuclear weapons due to ‘not having a choice’ would cause issues in the future,” but suggests that ‘provisional nuclear armament’ with the condition of “as long as North Korea has nuclear weapons” should be considered. He argues that placing the condition that Japan will take the lead among major powers and disarm itself of nuclear weapons once nuclear weapons are eliminated from the Korean Peninsula will “not be inconsistent with Japan’s principles as the only country to have been attacked with nuclear weapons.” Sakurada also states, “Debate must be carried out over nuclear sharing with the US” and over the Three Non-Nuclear Principles.

In response, Watanabe approves of the concept of ‘provisional nuclear armament’ being suggested by someone who is ideologically against nuclear armament, stating that it would be effective as one way to pressure countries that maintain diplomatic and trade relations with North Korea into cooperating with sanctions.

On the other hand, he stated that the arguments of civilian experts and the position of the Japanese government should be clearly separated, and argued that instead Japan should share the global opinion that North Korea possessing nuclear weapons would lead to the breakdown of nonproliferation worldwide, and lower the hurdle for the use of nuclear weapons, which have not been used since Hiroshima and Nagasaki.

Therefore, Watanabe notes that if Japan, which has supported nonproliferation as the only country to be attacked by nuclear weapons, was to lean towards provisional nuclear armament, it would damage the country’s credibility in sharing that opinion with other nations.