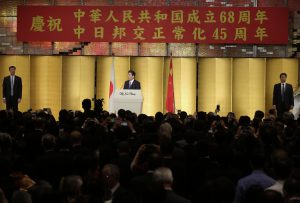 In a special contribution to Chuokoron for the 45th anniversary of the normalization of Japan-China relations on September 29, former People’s Daily (China) editorial writer Ma Licheng writes, “A long time may be necessary to fundamentally improve relations between China and Japan.” However, commenting on President Xi Jinping’s statement at the summit meeting with Prime Minister Shinzo Abe in July (in Hamburg, Germany) that “both countries need to consider the situation, keep a foothold in overall situation and from a long-term perspective, and not only strategically and correctly seize general orientation of peace, friendship and cooperation, but make solid efforts in action,” Ma argues, “The new thinking focused on letting go of historical grudges and reconciliation between China and Japan will certainly become the ideological axis for a new age of China-Japan relations, fulfilling a historic role.”

Ma notes that although over the 40 years since the normalization of relations in 1972 until 2012, the Japanese government apologized 25 times for its invasion of China, “The reason no real improvement can be made in bilateral relations is because China and Japan are engaged in strategic competition for the leadership of Asia.” However, he also stresses that the recent international situation and domestic situations within both countries are “encouraging a strategic rapprochement between China and Japan.” In particular, on the possibility of war between the US and North Korea, he proposes, “China and Japan have to ensure they understand each other regarding this problem.”

Ma reinforces the importance of his “new thinking” when it comes to the historical issues that cause friction between China and Japan, stating, “They must not be allowed to fetter development of bilateral relations.” He argues, “As Deng Xiaoping said, we must not be held back by historical resentment any longer. Both China and Japan are involved in the process of building a common destiny for humanity, and must dissolve their historical grudges in with love for humanity.”