Will India Manage to Overtake China? 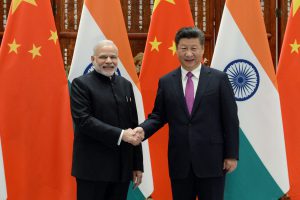 “China and India—Will the day come when the    two  powers stand side by side?”,

Horimoto gave his analysis that China’s One Belt, One Road initiative is a “‘Great Game’ for South Asia and the Indian Ocean,” with China exerting a major influence on the domestic politics of countries around India, such as with their massive investment in Pakistan through the China–Pakistan Economic Corridor (CPEC) project. He noted that at the Belt and Road Forum held by China in May this year, India “decided at the last minute not to attend the forum because of Kashmir border issues,” showing their growing annoyance with China.

On the other hand, Horimoto also noted that “There are those who claim that India is trying to please everybody with its diplomacy, especially when it comes to avoiding causing issues with China or the US.” He emphasized that when it comes to China, “While working to keep China in check on the one hand, India is also trying to build a closer relationship with them.” As an example, he pointed out that the month after boycotting the Belt and Road Forum, India and Pakistan became full members of the Shanghai Cooperation Organisation led by China.

Regarding Japan-India relations, Horimoto stated that the friendly relations between the two countries were only being maintained out of necessity, as a “marriage of convenience.” He suggested that although this relationship is likely to grow closer in the short term, “There is a possibility that could change in the future.”

In an essay in Voice, journalist and Japan Institute for National Fundamentals President Yoshiko Sakurai writes that the reason China began constructing a road earlier this year in Doklam, an area claimed by both Bhutan and China to the northeast of India, and incited a military standoff with India was “in order to exhaust the Indian Army and make sure it would not have the strength to challenge China.” According to the United Nations’ World Population Prospects, India’s population will overtake China’s by 2022, and so Sakurai states that in order to weaken the potential “future threat” of India, China “gave Pakistan nuclear technology. Their goal is for India to use their military to handle Pakistan, and so reduce the amount of military force India can use against China.”

In particular, Sakurai indicates strong concern over China having military bases around the world in Bangladesh, Pakistan, and Djibouti in East Africa: “This is serious because if China can complete their network over five continents along with their progress in space development and information technology, then not even the US may be able to resist China’s military hegemony.” She also argues that under the Trump administration, there are obvious indications that the US will decline: “The basis of this lies in a loss of values…. If President Trump cannot present a beacon for justice as a democratic country, then Japan has no choice but to display values to be aspired to.”