These excerpts are a view of the debate up to early September.

“How politicians should deal with voters who are impatiently seeking answers,” Chuokoron, October 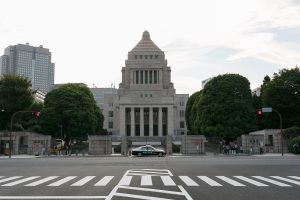 With the dissolution of the House of Representatives, a general election has been called for October 22. In a discussion in Chuokoron between Kyoto University Professor Satoshi Machidori and Hitotsubashi University Professor Koji Nakakita, Machidori states, “The current political issue is the state of political parties,” arguing that maintaining 20th-century style political parties which had firm ideals and organization was becoming infeasible. According to him, one reason for this is that “voters want political results in the short term, and political parties cannot respond to this desire.” Machidori notes his concern that currently political parties are “disposable,” and calls for “reusable” political parties that are long-lasting and cost effective. However, he also notes that in order to do so, “It is important to have a system in which supporters can be involved in the decisions made by the party.”

Machidori also states that the Komeito, which is maintaining the old style of organization, is functioning as a supplement to the Liberal Democratic Party, and that the Japanese Communist Party was similarly trying to cooperate with the Democratic Party, and in his analysis, “What is important to note here is that small, stable political parties are succeeding in getting a good price for selling their support base.” He suggests three reasons for this: 1) With multiple parties currently in the House of Councillors, cooperation with smaller parties is vital to ensure a majority; 2) In the first-past-the-post and proportional representation parallel voting system used for the House of Representatives, small parties are easily able to survive in the proportional representation voting; and 3) The regional organizations of both the LDP and DP are weakening.

However, Machidori notes that this parallel voting system “is not beneficial to the party that has the most seats before the election, it is beneficial to the party that has the most momentum before the election,” and comments on how if the increasingly fluid independent voters could be collected, it would be possible to “acquire more votes than the LDP and Komeito base, and take over the government.” Commenting on the influence of independent voters, Nakakita mentions the 1993 Hosokawa administration, 2001 Koizumi administration, and 2009 Democratic Party of Japan victory, stating, “The independents make an impact every eight years.”

The wavering Abe administration and an opportunity for opposition parties,” Sekai, October

In a discussion in Sekai between Hitotsubashi University Professor Koji Nakakita and Sophia University Professor Koichi Nakano, Nakakita gives the following three reasons for the strength of the Abe administration: 1) The LDP remains strongly unified; 2) The LDP and Komeito continue to cooperate at the national level; and 3) The DP and other opposition parties are performing poorly. In particular, he states that the birth of the LDP-Komeito coalition in 1999 was very significant, and that although there was a chance the coalition government might waver, if another party was to take power it would be through a “geyser-like eruption of an ‘independent revolt.’” He further emphasizes, “The only options are the coalition or change. The only way a change in government will be brought about is through extremely risky populism based on reform.”

Regarding the tentative cooperation between the opposition parties, Nakakita states that the election cooperation between the DP and JCP is far behind that of the LDP and Komeito, and that in the next House of Representatives election in which the ruling party will be selected, “If the Communist Party does not change its policies, the conditions for cooperation between the opposition parties will not be met…. I believe the Democratic Party should call for the Communist Party to change its policies.” According to Nakakita, while the LDP-Komeito coalition has 1.5 times more assured votes than the DP and JCP, and are very thorough in their adjusting candidates to not run against each other and lending of votes, the DP and JCP are not able to lend each other votes and also have difficulty in adjusting candidates.

Furthermore, Nakakita states concerns that cooperation between the opposition parties is more likely to lead to individual members relying on JCP votes to survive than it is to lead to organizational reform of the DP. With conservative members such as Goshi Hosono leaving the DP, Nakakita notes, “There is a risk of splitting up the DP, which is a coalition party of social democrats and centrist conservatives, and having it turn into a socialist party, or social democratic party.”