Learning From the Life of Dr. Shigeaki Hinohara 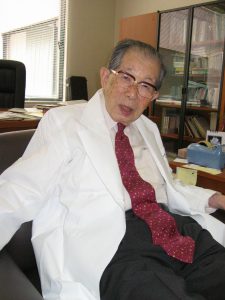 Dr. Shigeaki Hinohara, honorary president of St. Luke’s International Hospital, passed away on July 18, at the age of 105. He remained active throughout his life, even writing books and giving lectures. In a eulogy in Bungeishunju, nonfiction writer Kunio Yanagida writes about the nature of life and death, and the way of life he learned from his 38-year relationship as an author with Dr. Hinohara, who also valued the written word. Yanagida first met with Dr. Hinohara, who was 25 years older than him, in 1980. He was particularly impressed with how Dr. Hinohara was working on palliative care for people at the end of their lives during the 1980s “when treatment was excessively focused on extending life, and initiatives for care for the most important gentle departure in one’s life were not given consideration.”

Yanagida introduces a question from Dr. Hinohara to help explain his interest in palliative care. Referring to a quote by the philosopher Heidegger about the final death of human existence being the highest of mountain ranges, the doctor questioned why Western medical texts discussed death and dealing with dying patients in their openings on the topic of patient care, while Japanese medical texts eliminated any general discussion of death, and taught only practical theories. Yanagida states that this question is an example of a universal problem presented by Dr. Hinohara about medicine dealing honestly with people dying, based on his own bitter experiences in his youth, and reminisces, “I felt that I had suddenly encountered his medical principles.”

Yanagida also mentions how Dr. Hinohara revered famous physician William Osler “for his breadth of knowledge and learning in philosophy, literature, and religion, which he used to implement a style of medicine that considered patients as people.” When Dr. Hinohara had matured as a doctor in his 50s to early 70s, while both practicing clinical medicine and managing a hospital and nursing school he also read every book written by and about William Osler he could find, and wrote a biography. According to Yanagida, “His lifestyle, which spared no effort towards personal growth and improving his spirituality, could be the reason that he maintained such a youthful spirit even at the age of 100.”

According to Yanagida, Dr. Hinohara was living proof of philosopher Martin Buber’s quote “To be old can be glorious if one has not unlearned how to begin,” and the doctor frequently used this quote to explain how seniors could age gracefully. Yanagida mentions how Dr. Hinohara told him, “The final chapter of my life and how I face death are things I would like to create myself in a way I find satisfying,” and concludes by stating that Dr. Hinohara’s life after 90, or even the majority of his life as a doctor, “Truly was about ‘writing the final chapter of his life himself’ and ‘creating his death himself.’”