The Situation in North Korea and Japanese Security 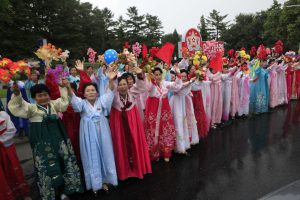 North Korea has been continuing with missile launches and nuclear tests since the September issues of magazines were released.  These excerpts are a view of the debate up to early August.

In an interview in Gaiko (given before his appointment as Minister of Defense), Minister of Defense Itsunori Onodera commented on the situation in North Korea, which after continuing development of nuclear weapons and missiles has reached the point of launch tests of intercontinental ballistic missiles (ICBM), saying, “In this situation in which it is unclear where North Korea could be firing from 24 hours a day, 365 days a year, it is unreasonable to expect Japan to stay on alert with its current equipment,” and arguing that to “move Japan’s missile defense to the next stage” it was necessary to introduce Aegis Ashore (land-based Aegis systems) and increase the number of Aegis ships from four to eight.

Commenting on a Liberal Democratic Party (LDP) proposal about missile defense made in March that suggested Japan maintain the capability to counterattack enemy bases, Onodera noted that the ability to counterattack against North Korea, “not letting them fire a second missile should they fire a first,” would be a major deterrent. Regarding the legal basis for this capability, he mentioned a government view from 1956 that “In the case of an imminent unlawful attack, when no other options are available, the minimum required action may be taken, such as attacking an enemy base using a guided missile,” and stated, “As long as the conditions are properly met, there will be no problems with the constitution.”

Regarding the argument that Japan should focus exclusively on defense and leave all other security activities to the U.S., Onodera indicated his belief that “Drawing lines like that is not very effective,” and argued, “As the international environment surrounding Japan worsens, the reality is that Japan’s security is being maintained only thanks to cooperation between Japan and the U.S. at various levels.” Regarding Japan acquiring its own early warning satellites to improve its missile defense system, he stated, “The U.S. is almost totally unconcerned that Japan might use its own unique technology and ignore the U.S.’s actions,” and suggested that bilateral discussions should be started about increasing survivability against attacks, such as Japan acquiring its own early warning satellites. At the time of this interview, Onodera was head of the LDP panel that made the missile defense proposal.

In an essay in Gaiko, former Administrative Vice-minister of the Japanese Defense Agency and current Chairman of the Society of Security and Diplomatic Policy Studies Masahiro Akiyama gave a harsh analysis of the situation in North Korea, with North Korea possessing nuclear weapons essentially a fait accompli: “We are left with only two choices: effectively giving our silent consent, or working long-term towards the denuclearization of the Korean Peninsula for 10 or 20 years.” He further argued that: 1) An appeasement policy towards North Korea should not be taken for the time being, 2) It would be a mistake to take military action that could trigger a war, and considering the state of security for Japan and South Korea such action could not be taken, and 3) For measures taken in response to further nuclear tests and missile launches by North Korea, tactical nuclear weapons should be redeployed to U.S. military bases in South Korea in order to increase confidence in mutual deterrence between South Korea and North Korea, and create a foundation to encourage dialogue between the two.

Regarding Japan’s response, Akiyama stated his belief that improving Japan’s missile defense systems had the goal of “showing North Korea the limits of nuclear deterrence in order to draw them into dialogue,” and argued, “Japan should support China’s actions to bring North Korea back to the table for dialogue.” Akiyama said that otherwise, direct dialogue would go forward with the U.S. approaching either China or North Korea, and “Japan would not be involved.”

In Japan-South Korea relations as well, Akiyama noted that the Moon Jae-in administration is looking for a way to open dialogue, and argued, “After having carefully checked the methods and content of this dialogue, Japan should proactively evaluate a policy of dialogue, and seriously consider reopening talks with North Korea.” On the denuclearization of North Korea, Akiyama stated, “It could only take place after dialogue leading to peaceful coexistence between North and South Korea as they work towards a peaceful unification.”

In an article in Chuokoron, international political scientist Ken Endo argued that in response to North Korea’s nuclear weapons development and missile tests, “The reality is that a war cannot be started without being prepared for massive losses by allied countries,” stating his opinion that it would be difficult for Japan, the U.S., and South Korea to carry out a military “surgical procedure.” He also declared that despite U.S. President Trump’s hardline stance, “It has become obvious to everyone—including Kim Jong-un—that it will not lead to war,” noting that the limits to “pressuring” North Korea have been revealed.

Regarding the scenario in which Japan, the U.S., and South Korea put pressure on China, Endo gave his analysis that “No matter how much China may actually find North Korea to be a nuisance, due to geopolitical considerations they will not make a move to end the regime.” He also noted that due to a desire to repair relations with China which worsened when the THAAD (Terminal High Altitude Area Defense) missile system was deployed in South Korea, “South Korea may not be able to keep up with Japan and the U.S. in putting pressure on China.” Regarding Prime Minister Abe’s comment towards the Moon Jae-in administration, which is interested in opening a dialogue with North Korea, that “Now is a time to apply maximum pressure, not a time for dialogue,” Endo declared critically that “Those words sound hollow now. North Korea is not afraid of pressure, and they would not be enticed into dialogue in the first place.”

Considering these events, Endo concluded, “Japan must begin preparations to rethink its position. Although unpleasant, the possibility of recognizing a North Korea with nuclear weapons and coexisting along with it. The time may have come to consider this reality.”