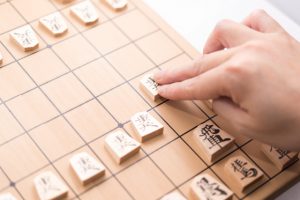 “Sota Fujii does not seem to have any weaknesses,” Bungeishunju, August

On June 26, junior high school student and shogi pro Sota Fujii (15 years old, ranked at fourth dan) won his 29th match in a row since his professional debut at the age of 14, beating the 30-year-old record for longest consecutive winning streak. In an interview with journalist Arata Kitano in Bungeishunju, top shogi pro Yoshiharu Habu (current holder of the Kisei, Oi, and Osho titles) showered Fujii with praise, saying, “An incredible new player has arrived…I see no weaknesses.” With a prodigy having set a historic new record for consecutive wins, there has been a sudden burst of interest in shogi despite its popularity having been declining recently, and Habu welcomed the appearance of this prodigy: “As of now, he does not seem to be lacking or unrefined in any area. It is extraordinary that he can play shogi like that at that age.”

One of the reasons for Fujii’s level of skill is his use of shogi software. Fujii began improving significantly approximately one year ago, when he began using computer programs to study shogi. In a previous interview with Kitano, Fujii commented, “Software providing ratings (providing numerical indicators evaluating the relative strength of players and odds of the match) is a revolutionary development for shogi.” While Habu accepts that using shogi software has now become standard practice in the world of shogi, he has doubts: “It is currently unknown what the best way to use this software is, and what negative effects it might have…. Just how much it will benefit people is a mystery.”

With the May 2017 victory of the Ponanza software over Meijin title holder Amahiko Sato, the battle between shogi pros and computers seemed to reach a conclusion, with software coming out ahead of humans. With artificial intelligence becoming part of shogi, people are interested in how the prodigy Fujii will continue to grow. Speaking on Fujii’s future, Habu stated, “Shogi is a very deep game, and I believe he has the potential to become incredibly skilled. I believe there are sights that can only be seen by people with that kind of skill.” It took Habu approximately 10 years from his pro debut to manage to win all seven major titles, but some are hopeful that Fujii will manage to set a new record for the youngest age to win a first title (current record is 18 years and 6 months old.)