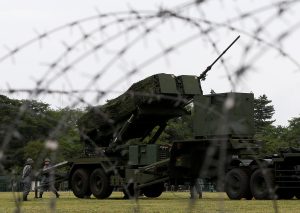 ■Kunihiko Miyake,  “Will Japan be able to remain one of the      ‘winners’ in East Asia?”  Voice, August

In an essay in Voice, Foreign Policy Institute President Kunihiko Miyake comments on North Korea’s continued missile launches and nuclear weapons development, declaring, “North Korea’s desire is not provocation, it is survival.” Stating that Kim Jong-un’s goal is to be recognized as a nuclear power, and to use that military strength to enter into a peace treaty with the U.S., Miyake’s analysis is that North Korea “is not only not being erratic, it is in fact using a rational strategy.”

Miyake is also critical of the approach Japan, the U.S., and South Korea have taken towards North Korea so far, calling it an appeasement policy. Stating that the reason the three countries had no choice but to focus on talks over pressure was that “neither China or South Korea wanted a change in the status quo on the Korean Peninsula,” he argues, “This ‘appeasement policy’ was doomed to failure.”

Miyake notes concern over a power vacuum being created in East Asia: “Whether through an internal collapse of North Korea, or a decrease in U.S. naval activity in the region, a power vacuum could occur in East Asia at any moment.” He follows by stating that the worst scenarios for Japan and South Korea would be 1) The U.S. fumbling its initial response, allowing China to monopolize the benefits of the vacuum as the strongest outsider and functionally annex the northern part Korean Peninsula, or 2) Before that point is reached, having the U.S. tacitly consent to North Korea becoming a nuclear power in order to maintain the status quo.

Then what strategy should Japan take? Miyake suggests, “Japan must avoid creating a power vacuum in East Asia by itself,” stating that together with allied and friendly nations Japan must maintain and expand deterrence. In the event that a power vacuum occurs, he argues Japan should continue to be involved, as “an interested outsider.” He concludes, “Japan should align itself with international society, and the cause of universal values, in order to remain one of the ‘winners.’”

July this year marked the 20th anniversary of the handover of Hong Kong to China. In a discussion in Sekai with Rikkyo University Professor Toru Kurata and Hosei University Professor Madoka Fukuda, The University of Tokyo Professor Shin Kawashima stated that despite Hong Kong and Taiwan being “the front line of democracy and freedom” in East Asia and the Western Pacific as a whole, “It is doubtful how much Japan is contributing.” In particular, Kawashima indicated concern that over the past 10 years Japan’s interactions with Hong Kong have rapidly declined, and as for Taiwan he noted that “There is a trend towards just a simplistic understanding of whether they are pro-Japan or not.”

Although U.S. President Trump seemed to make indications about rethinking the One China policy soon after taking office, Kawashima stated that the U.S. was “testing China to see how they respond to the North Korea issue,” and so the U.S. would not be making any moves regarding Taiwan in the foreseeable future. At the same time, he also noted that the reason the American policy on Taiwan seems unclear was that “it is not known how much interest President Trump has in” the “lateral cooperation” between American allies in the West Pacific which had been encouraged by the former Obama administration. Regarding the U.S.’s stance on Hong Kong, Kawashima declared, “Regardless of human rights issues, it would not be part of any international political ‘deal.’”

In Hong Kong, with the “one country, two systems” framework, the limit of the systems being unchanged is 50 years, and so while youth are working to achieve democratic self-determination before the deadline of 2047, China is working on the “Chinafication” of Hong Kong by 2049, the 100th anniversary of the founding of the People's Republic of China. Kurata emphasized, “Hong Kong is on the front line, as the society most directly confronting China,” and argued that Hong Kong was an important point of reference for Japan when considering “what role Japan should play within East Asia as China grows in power.”