Can Japanese Cars Win in the Global Market? (TOYOTA) 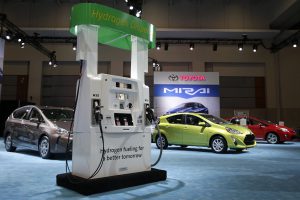 Can Japanese Cars Win in the Global Market ? (TOYOTA)

“Using AI and hydrogen to compete,”

In a special feature in the June issue of Bungeishunju, Kiyotaka ISE, senior managing officer and president of Advanced R&D and Engineering Company at Toyota Motor Corporation, notes his belief that “The automobile industry is facing a major revolution of the kind that happens once in a hundred years,” and promotes a strategy to survive as an automobile manufacturer that revolves around artificial intelligence (AI) and using hydrogen as a green initiative.

According to Ise, another goal is achieving zero carbon dioxide emissions, and so Toyota is continuing research in electric vehicles (EV) and fuel-cell vehicles (FCV) using hydrogen. FCV have issues including the difficulty of cost-efficient mass production and installation of hydrogen fuel stations, but Ise emphasized, “When considering a future energy mix, we believe Japan should become a hydrogen-based society.” Furthermore, Ise stated, “We would like to use our technical capabilities to ensure the changing automobile industry becomes a place where new industries are born.”