U.S. and Chinese Strategy for North Korea, and Japan’s Response 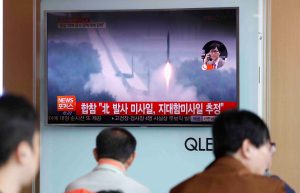 U.S. and Chinese Strategy for North Korea, and Japan’s Response

In a discussion in the June issue of Chuokoron between Nanzan University professor Shunji Hiraiwa and the University of Tokyo professor Shin Kawashima, Hiraiwa commented on the issue of North Korea’s missile and nuclear weapons development, noting that while the U.S. does have the choice of a military strike against North Korea, the Trump administration “also has the option of accepting North Korea possessing nuclear weapons, which must be kept in mind,” on the condition that no missiles would be launched at the U.S. Regarding North Korea’s response, he also said that if the situation becomes more tense, “It could easily lead to a choice between the two extremes of attacking or making a deal,” emphasizing that “freezing development is an option for North Korea.” In other words, North Korea could freeze development on intercontinental ballistic missiles (ICBMs) that could reach the U.S., while at the same time the U.S. could allow development of mid-range missiles which Japan is in range of. “This kind of agreement would be very bad news for Japan,” Hiraiwa commented, indicating concerns that such concessions between the U.S. and North Korea could become a ‘nightmare’ for Japan.

Commenting on the actions of China, which is key to the situation in North Korea, Kawashima noted that this year is a “year of personnel changes” for the Xi Jinping administration: “If they move too much or too little in regards to North Korea, they could face criticism domestically.” He gave his opinion that China will begin to take serious action “in fall this year or later.” Specifically, he suggests China will take action after the U.S.-China Comprehensive Economic Dialogue in July, the G20 summit and U.S.-China summit meeting also in July, and the National Congress of the Communist Party of China in October. Hiraiwa also commented, “There is a high probability that the current tense situation will continue for some time,” but also noted the possibility of the U.S. and North Korea seeking dialogue. He emphasized that in that case, “I believe the most likely scenario is China acting as a mediator to bring the U.S. and North Korea closer together.”

Kawashima, while stating that the situation allows the Japanese government to respond more easily than when the current Abe administration began in 2012, argued that “the response has seemed a little simplistic” considering the recent situation with North Korea: “The government could carry out more concrete initiatives in the international community, put more pressure on the Trump administration, or engage in more dialogue with China.”

“Learn from the failure of the Pacific War,”  Bungeishunju, June

Commenting on the situation in North Korea in a discussion with author Kazutoshi Hando in the June issue of Bungeishunju, journalist Yoichi Funabashi argued, “The biggest potential difference with the current situation is whether China and North Korea have an unbreakable relationship,” and provided his analysis that “The relationship between China and Kim Jong-un is precarious.” According to Funabashi, in the past China prioritized avoiding the collapse of the North Korean regime in order to use the country as a buffer zone for security, but within China’s government, “some members of the leadership have started to view the negatives of the alliance as outweighing the positives…. Xi Jinping is likely among them.” Hando agreed: “I believe China is shifting towards the stance that they can split from North Korea. And it seems like the Trump administration also believes that China and North Korea can be separated.”

Funabashi suggested there are two main possibilities for how things will progress. The first is a regime change in North Korea, ideally a leadership change that eliminates Kim Jong-un. However, he notes that China would not accept a regime change. The other possibility is the U.S. forcing North Korea to sit at the negotiating table, but Funabashi noted in that case, the Trump administration has not yet examined whether it would insist on denuclearization, or whether it would accept a freeze on development of missiles and nuclear weapons. In response, Hando declared, “I think a freeze would be good enough.” In explanation, he mentioned the “lessons of the Manchuria Incident” that occurred leading up to World War II: “In the same way that ‘Manchuria was Japan’s lifeline,’ ‘missiles and nuclear weapons are North Korea’s lifeline.’ Having come this far, it is impossible to return everything to zero.” He emphasized that since North Korea has already passed the point of no return, there is no choice but to push for a freeze on missile and nuclear weapons development.