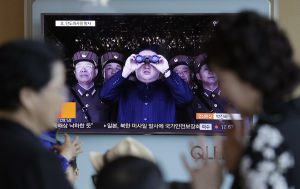 In a column in Bungeishunju, analyst Yoichi Funabashi comments on the increasing tension surrounding North Korea: “It is predicted that North Korea will have 100 nuclear weapons by 2020, and that they will develop intercontinental ballistic missiles (ICBM) that can reach the west coast of the U.S. within the next two or three years.” He also provides his analysis that realistically, “It is very difficult to neutralize nuclear capabilities with preemptive military strikes” by the U.S. or others. He suggests that the reason the U.S. government is hinting at military options, despite the majority of Americans wanting to avoid military conflict, is that “This is a threat that if China continues to be halfhearted in its approach to sanctions against North Korea, the U.S. is willing to take military action.”

Funabashi declares that “Sanctions are not a strategy” for dealing with North Korea. He states that this is because it is unclear whether the goal of sanctions is to bring about a change in the regime, or to bring North Korea to the negotiating table. He concludes, “It is necessary to think about how to bring North Korea to the negotiating table for denuclearization.” Funabashi proposes holding both bilateral talks between the U.S. and North Korea, and between five parties (including the U.S., China, South Korea, Japan, and Russia), to increase sanctions on North Korea, and if North Korea still refuses to negotiate, then to “implement a collaborative policy to ‘contain’ North Korea, including stronger sanctions.” If North Korea’s regime collapses, he calls for “switching the five-party talks to a crisis response unit.”

◎ Discussion, “Japan should act as a liaison for Asia,” Gaiko, Volume 42

In a discussion published in Gaiko, former Vice-Minister for Foreign Affairs and current Ritsumeikan University professor Mitoji Yabunaka indicated concern over the Trump administration’s plans to cut the State Department budget: “With his emphasis on the military, he may be neglecting diplomacy.” His analysis of the increasingly tense situation in North Korea is that for the time being, the U.S. “will work to convince China to apply pressure,” but on the question of whether the U.S. would take an approach towards dialogue or military retribution he emphasized that “either approach is possible” in the future. Commenting on U.S.-China relations, which have been shaken by the trade deficit and currency manipulation being raised as issues, Yabunaka notes that the American and Chinese economies are closely linked, and in the end, “I believe China will provide some way to make President Trump look good, and the problem will be solved by summer.”

National Graduate Institute for Policy Studies president Takashi Shiraishi states that previous American administrations carried out bilateral and multilateral diplomacy simultaneously in Asia, but that the Trump administration is “not thinking from that perspective.” For that reason, he notes it is unclear what will happen with the U.S. rebalance/pivot towards Asia, and with the Asia-Pacific “hub and spoke” maritime alliances. Shiraishi also states that with the American withdrawal from the Trans-Pacific Partnership agreement (TPP), the Association of Southeast Asian Nations (ASEAN) will “want to finalize the Regional Comprehensive Economic Partnership (RCEP) in order to maintain centrality,” and gives his opinion that “In addition to the RCEP, the time has come to consider how to use the Asian Infrastructure Investment Bank (AIIB).”

■Masahiro Kohara, Professor, The University of Tokyo    “What are national interests?” Chuokoron, May

In an essay in Chuokoron, The University of Tokyo professor Masahiro Kohara proposes that Japan’s strategy during the Trump era should be: 1) Building an unshakeable Japan-U.S. alliance, 2) Improving Japan-China relations, and 3) Reviving a strong, liberal Japan. He notes that the birth of the Trump administration has created two risks that are “Striking directly at Japan’s national interests of safety, prosperity, and order.” According to Kohara, those risks are “The risk of war occurring as part of the process of a shift in power between the major powers,” and “the risk of the collapse of the liberal order” that has been supported by an international economic system based on freedom and the rule of law.

In order to overcome these risks, Kohara argues that first, “With the increasingly precarious security situation…even greater efforts should be carried out to improve Japan-U.S. cooperation, including in the case of a crisis,” calling for efforts to create an unshakeable Japan-U.S. alliance. Second, he proposes “Stabilize Japan-China relations, and develop a win-win cooperative relationship…. If a Japan-U.S.-China trilateral summit was organized to engage in dialogue, it would contribute to reducing tension and building trust.” Third, he argues that in addition to recovering strong economic growth that would enable Japan to escape long-term deflation, “As a strong liberal nation, Japan should work together with other countries sharing the same ideals, to protect ‘a free and open international order based on the rule of law.’”