The Trump Administration and Japan–U.S. Relations 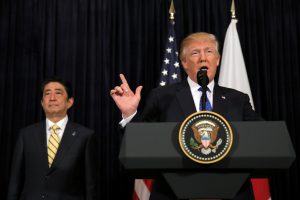 The Trump Administration and Japan–U.S. Relations

In an essay in Bungeishunju, LDP party member and former Minister of Defense Shigeru Ishiba argues that security is the most important issue for Japan–U.S. relations after the inauguration of President Trump, and Japan should “actively work to describe the ideal state of Japan–U.S. security, to protect Japan’s peace and independence.”

The joint statement from the February Japan-U.S. summit clearly stated, “The U.S. commitment to defend Japan…is unwavering,” and it also confirmed that “Article V of the U.S.–Japan Treaty of Mutual Cooperation and Security covers the Senkaku Islands.” However, noting, “Although I think it was excellent that the summit was successful, it is necessary to take a step back and calmly look at reality,” Ishiba insists, “We cannot just leave things alone, thinking ‘Great, the U.S. will definitely protect us.’” In particular, since President Trump has been saying that he would fundamentally reconsider existing policy, Ishiba argues, “We must fundamentally reconsider the state of Japan–U.S. security and the role of the Self-Defense Forces.”

Regarding Trump’s decision to withdraw from the Trans-Pacific Partnership agreement, Ishiba notes that an important issue in bilateral negotiations between Japan and the U.S. will be how to protect the beef and pork livestock industries. He indicated that Japan–U.S. relations under the Trump administration had not “finished with the success of the Japan–U.S. summit,” but had instead “reached the starting line.”

In an essay in Bungeishunju, former Sony president and current Quantum Leap CEO Nobuyuki Idei writes that although the Trump administration is viewed as taking a hard stance on China, “To me it looks like the administration is acting with respect towards China, maintaining an adult relationship.” He emphasizes that U.S.–China relations are “complex,” and it is not possible for those on the outside to fully comprehend them. He followed by stating, “A confrontation with China has no benefits to the U.S.,” and argued that the Trump administration will “naturally move towards strengthening relations with China.”

Idei also noted that there are deep connections and relationships being built between American political and business elite and senior members of the Communist Party of China. He writes that in China, Henry Paulson, former Goldman Sachs CEO and Secretary of the Treasury under the George W. Bush administration, is being looked at as a potential key intermediary for U.S.–China relations.

However, Idei also states that he believes Trump’s ambition is “to create a new world order for the 21st century, replacing the post-World War II world order,” and that it is possible Trump will attempt to make drastic budget cuts to international organizations that helped create the post-war framework, such as the G7, G20, IMF, and UN. Discussing what path Japan should take in the midst of these changes, Idei states, “There is no need to panic even if the U.S. and China begin to work together in harmony. Japan can just calmly work towards becoming the leader of a second group.” He argues, “Japan should work to become a unique, mature nation relied on by the rest of Asia, without moving too close to either the U.S. or China.”

In an essay in Seiron, Sophia University professor emeritus Shoichi Watanabe, writing on the future of Japan–U.S. relations after the February summit, argues, “There is a solid foundation for Japan–U.S. relations, and as long as nothing extremely out of the ordinary happens, Japan is in a position to calmly carry out its policies.” Stating that the confirmation of the Senkaku Islands being covered by Article V of the U.S.–Japan Treaty of Mutual Cooperation and Security was “a step to clearly defining borders,” he argued that both countries should recognize the military threat presented by China, and if they are of the same opinion on reconfirming the importance of “borders,” there is no need to worry about other issues such as the economy. Watanabe also praised Brexit and the birth of the Trump administration, saying that while other countries are following the path to liberalism, these events clearly demonstrated “the importance of borders.”