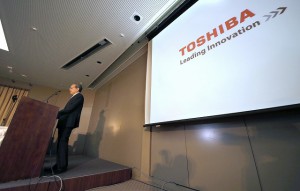 Toshiba, one of Japan’s biggest companies, is now in crisis as its accounting scandal that came to light in 2015 has been followed by a loss of over 700 billion yen for its U.S. nuclear business. The situation around Toshiba’s excessive debt is still fluid, and much of it is still speculation, but the following articles bring up several issues.

In an essay in Sekai, accounting critic and Certified Public Accountant Mr. Yuji Hosono writes that Toshiba’s current state of insolvency “will not be fundamentally solved no matter how much capital they inject,” and states his opinion that Toshiba will not be able to survive without eliminating its nuclear business entirely.

When Toshiba’s fraudulent accounting first surfaced, the company stood by its claims that the over 150 billion yen in inflated profits was “simply an accounting error.” However, soon after the scandal Hosono suggested that the real reason was losses from the nuclear business of Toshiba’s American subsidiary Westinghouse (WEC).

According to Hosono, the problem is that Toshiba/WEC bought out the American construction company Stone & Webster (S&W) in 2015. Why did WEC purchase S&W with no foreseeable profitability, considering nuclear standards became stricter and profits decreased after the 2011 Fukushima nuclear accident? Hosono suggests that WEC “was fully aware that not only would S&W not be profitable, but with additional costs their earnings forecast could not be met,” and the reason they pushed forward with the zero-dollar purchase even with undisclosed debts off the books was to cover up the WEC’s profitability issues.

Hosono firmly states that the only reason costs for generating nuclear power are low is because “management costs for nuclear power, including decommissioning costs, are being given low estimates.” He argues that the additional costs for S&W “arose due to the increasing severity of what is socially acceptable nuclear power management, which will not stop until a point is reached where there is no business reason to build a nuclear power plant.”

Nonfiction writer Mr. Hiroshi Kodama reports on how the attitude of the government has changed towards Toshiba, which has a major role in Japan’s nuclear power industry. He writes that since a former Toshiba employee was in an important position in the Office of the Prime Minister at the time of the 2015 accounting scandal, the government “put a lid on the infection at Toshiba instead of removing it,” and gives his opinion that in response to the current situation, “METI as a whole has rejected Toshiba.”  Based on how the company has already suffered a loss of several hundred billion yen with only 30% of construction completed for the nuclear power plants in the U.S., he notes, “No one is sure how large this loss will become if construction continues.” Stating that it is too early to predict the outcome of Toshiba’s restructuring, Kodama suggests, “The possibility has increased that the company will be dismantled through sales of its assets.”

Commenting on the results of a survey on advisers and consultants at major companies carried out by Bungeishunju, journalist Mr. Yasuyuki Onishi noted that Japanese companies have “‘elders,’ advisers and consultants with no clear authority or responsibility participating in running the business.” Toshiba eliminated its adviser and consultant system in June 2016 after the accounting scandal, and so Onishi is critical of the fact that “Currently, the former CEO Mr. Muromachi is an Executive Adviser, and four former CEOs including Mr. Nishimuro are Honorary Advisers.” He also notes, “With Toshiba’s accounting scandal, overseas investors have become aware of Japan’s abnormal business practices,” and emphasizes that there are growing concerns over governance in Japanese companies just being “hollow systems.”

In a feature essay in Seiron, journalist Mr. Katsuhiro Kuroda praises the Japanese government’s decision to recall the ambassador to South Korea and consul general in Busan over the installation in front of the Consulate General of Japan in Busan of a statue symbolizing comfort women, stating, “This indicates a qualitative change in Japan’s policy on South Korea.” His analysis is that the reason the reaction from the South Korean government and mass media this time was surprise and confusion over Japan having gone so far, as opposed to criticism of Japan, is due to a growing “sense of diplomatic isolation” in South Korea. Kuroda also states, “Japan’s argument that international laws are being violated have finally seen the light of day in South Korea.”

On the subject of how a new reform administration critical of the Japan-South Korea agreement on the comfort women issue seems likely due to the scandal with the Park administration, Kuroda argues, “No matter who is in charge of the next administration, Japan can just make use of the argument that ‘South Korea is acting inappropriately from an international perspective.’”

・Fumio Kishida, “Looking at the future of a ‘Year of Change’—forward-looking diplomacy bearing fruit,” Gaiko Vol.41

In an interview in Gaiko, Minister for Foreign Affairs Fumio Kishida commented on Japan-South Korea relations, saying, “South Korea is our most important neighboring country with which we share strategic interests.” He followed by reiterating that the agreement between Japan and South Korea on the comfort women issue was “very meaningful for moving forward with Japan-South Korea cooperation on security.” He then stated that the installation of the comfort women statue in front of Japan’s Consulate General in Busan violated the Japan-South Korea agreement and the Vienna Convention on Consular Relations, and called once more for the agreement to be fulfilled: “Fulfilling the agreement is the responsibility of both Japan and South Korea as members of the international community, and will contribute to regional peace and stability, which will in turn contribute to the international community.”