In an essay in the Vol. 41 of Gaiko, University of Tokyo professor Dr. Yasuhiro Matsuda argues that with the Trump administration, it is unclear what will happen with U.S.-China relations and so it is necessary to increase not only the “hedge” function of the Japan-U.S. alliance towards China’s maritime expansion, but also increase its capacity for “involvement.”

Matsuda states that a main reason for China’s expansion in the South China Sea is “the weakness of involvement by the U.S. military.” He notes the only countermeasures taken by the Obama administration were freedom of navigation operations starting in October 2015, and declares, “No more action was taken due to the risk of provoking a dangerous reaction…. It is inarguable that the Obama administration took the wrong course of action against China.” As a result, “The Trump administration has been left with the negative legacy of ‘a China that successfully changed the status quo.’”

Matsuda states that due to the worsening instability in the South China Sea, “If necessary, the U.S. military must demonstrate the presence of its warships, even if it leads to a confrontation with the Chinese military.” He also argues that Japan and the U.S. should cooperate on improving the Philippines’ security and monitoring system, and increase collaboration with ASEAN member states, South Korea, and Australia. Matsuda suggests Japan should deal with China “not by acting rashly, but by continuing to take a stance from which the international community will understand Japan’s position.”

Regarding Japan-U.S. relations, the professor states, “Japan has to continue arguing for the U.S. to stay involved, so the two countries can share the understanding that the stability of the Asian region—the most economically beneficial region for the U.S.—is directly connected to American national interests.” He argues that the hedge function of the Japan-U.S. alliance alone will not be enough to deal with China’s maritime expansion, and so “It is necessary to move towards a role of involvement again.”

In a four-person roundtable discussion published in Bungeishunju, foreign policy expert Yukio Okamoto states that China’s maritime expansion is based on a naval strategy created in the 1980s, and that it is predicated on “ultimately controlling the entire Western Pacific region, including Taiwan.” Former Japan Ground Self-Defense Force Lieutenant General Yoshikazu Watanabe gives his analysis that if the Chinese military moved on Taiwan, the U.S. does not have overwhelming superiority as it did during the 1996 Taiwan Strait Crisis, and so the U.S. “would have an extremely difficult time achieving total victory.”

Okamoto stresses that, more so than Taiwan, “Japan must take action immediately” for the Senkaku Islands. Noting that China showed more restraint after President Obama explicitly stated that the Senkaku Islands were covered by Article 5 of the Japan-U.S. security treaty, he argues “We must have President Trump make the same statement as soon as possible.”

Regarding the possibility of a conflict between Japan and China over the Senkaku Islands, former Japan Maritime SDF Vice Admiral Toshiyuki Ito states that there is a high chance that China’s paramilitary, armed fishing boats could take the Senkaku Islands. In this case, if Japan declared a defensive mobilization they could counter with use of force, but he warns that with current laws it would be difficult to carry out smoothly.

Okamoto emphasizes that in order to avoid a conflict between Japan and China in the Senkaku Islands “the most important thing is to strengthen the Japan-U.S. security framework,” and notes that the basis for deterrence for Japan-U.S. security is that “The security treaty will take effect immediately if any untoward actions are taken.” However, Okamoto also notes that confusion over issues surrounding the U.S. military base in Okinawa are a cause for concern, stating “It is important to deal with the Okinawa issue smoothly,” and pushes to further strengthen the Japan-U.S. alliance. 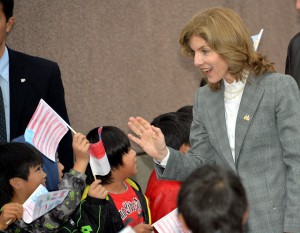 In the March edition of the Bungeishunju, analyst Yoichi Funabashi writes about former U.S. Ambassador to Japan Caroline Kennedy, who held the position for over three years from November 2013: “No other American ambassador entranced the people of Japan to the end as she did.”

Noting that when she first took the position there was skepticism about her capabilities in both Japan and America due to her lack of diplomatic experience and the fact she was not an expert on Japan, Funabashi states, “However…in the more than three years since her appointment, she performed a major task that no one else had managed to. She carried out quiet, yet effective, diplomacy to finalize the post-war reconciliation between Japan and the U.S.”

As an example, he discusses the actions the ambassador took behind the scenes regarding the comfort women issue with South Korea. Specifically, for Prime Minister Shinzo Abe’s statement on the 70th anniversary of the end of World War II, when shown the final draft for the statement Kennedy suggested that he speak more directly about Japan and South Korea’s relationship. Funabashi says that it was thanks to those comments being included in the statement that Japan and South Korea were able to come to an agreement on comfort women at the end of 2016.

Funabashi also states that during Obama’s visit to Hiroshima, National Security Adviser Susan Rice was hesitant about him going to the Hiroshima Peace Memorial Museum, but “Kennedy met directly with Obama, saying how meaningful a visit to the museum would be, which resulted in the visit occurring.”

Describing the ambassador, Funabashi writes, “Completely selfless, elegant, and modest; her warm personality is likely her most appealing point.” He also describes the events behind Obama’s gift to Nagasaki of two origami cranes representing peace and a world without nuclear weapons: “She wanted to present origami cranes to Nagasaki as well. When she returned to Washington in November last year, Obama gave her two origami cranes, red and pink, that he folded, and she presented them to the mayor of Nagasaki at the beginning of this year.”