In an essay in the February issue of Sekai, University of Tokyo Professor Shogo Takegawa reviews the three years since January 2014, when the Japanese government passed an act to combat child poverty, and notes the difficulty of improving the current situation in Japan: one in six children from 0 to 17 years old live in poverty.

Takegawa states that previously, poverty was an issue for people with illnesses or disabilities, or who had lost their jobs, but provides his analysis that the “new poverty” now affects women, children, and working poor. In addition to instances of these categories overlapping, elderly poverty has also become an issue in recent years. One reason that child poverty in particular is a focus of attention is that it is “the ultimate example of inequality of opportunity,” and this is a kind of “ideological issue” that no one can argue against.

He also points out that measures to combat child poverty simultaneously protect the rights of children and “benefit public welfare.” Specifically, eliminating child poverty is “societal investment” into developing valuable skills, and can create a “virtuous cycle” by having children escape the cycle of poverty at an early stage in their life and so increase tax revenue. Based on these points, he argues that “a tax hike may be inevitable” in order to fund valuable policies such as free health care, increased child benefits, and free compulsory education.

・Eisaku Ide, “From ‘stealing and helping’ to ‘fulfilling and responding’,” Voice, February

In the February issue of Voice, Keio University Professor Eisaku Ide writes that despite Japanese society growing rapidly poorer in the past 20 years, with inequality growing as well, “Although many Japanese people are aware of poverty, they do not believe society is not equal.” As a results of this situation, people in the lower middle class are against strong measures promoted by opposition parties to support those in poverty, as they believe these measures would lead to their own poverty. Ide asks whether the system where only those in poverty receive benefits has reached its limits.

To solve this problem, Ide proposes a system where everyone is a beneficiary, instead of only certain people. Specifically, he argues that instead of providing cash benefits to cover services everyone requires, such as education, child benefits, health care, and nursing care, there should be a shift to a system where the service is provided equally to everyone. By implementing this method of “symbiotic redistribution,” in which everyone is a beneficiary instead of just those suffering from poverty, Ide argues inequality can be addressed, and the opposition or “division” between beneficiaries and those paying for benefits lessened, thus developing empathy between people. 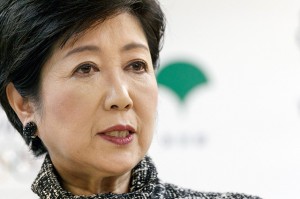 Six months since Ms. Yuriko Koike became Governor of Tokyo, interest in Tokyo politics and the actions she takes remains high. In an interview in the February issue of Seiron, she states that her ideal as a conservative politician is to be “conservative towards the outside, and reform the inside.” In a time of upheaval, she compared herself to a swan kicking its legs furiously under the surface: “By elegantly speaking to the outside world about Japan’s current state and traditions, and carrying out reforms in unseen areas, I would like Japan to maintain the position it deserves.”

Regarding the similarity between Koike’s catchphrase “Tomin First” [Tokyo residents first] and President Trump’s “America First,” she says that her impression on him is that “‘politics of real feelings’ are being carried out... The election of President Trump may provide a good opportunity for Japanese people to think about what it means to protect Japan.”

Regarding moving from Tokyo politics to the national stage, she states “It is possible to change the country even without becoming involved in national politics…. How Abenomics works out will change significantly based on Tokyo’s actions.” She emphasizes how Tokyo fulfills a role as the “lead actor” and the “vanguard” in Japan’s politics and economy.

In a discussion between Governor Koike and analyst Takashi Tachibana in the February issue of Bungeishunju, the governor states her goal is for Tokyo to be a “safe city, a diverse city, and a smart city (leader in environment and finance),” making it an attractive city in which people, goods, money, and information are all available. She aims to have Tokyo take first place in the Global Power City Index which ranks international cities by attractiveness (Tokyo ranked third in 2016, behind London and New York.)

To carry out the reforms necessary to meet these goals, collaboration with the Tokyo Metropolitan Assembly is essential: “Since the governor and assembly members are selected by separate direct elections, it is functionally a system of dual representation. Some type of ‘coordination’ is necessary between the governor and the assembly in order to make decisions.” Koike explains, “‘Tomin First’ is very important…. I have worked to ensure information is disclosed, as transparency is important for the process of policy decisions, including how tax money is being spent.”

In preparation for the Tokyo Metropolitan Assembly election in July this year, Koike started the political school Kibo no Juku [School of Hope], which over 4000 people have attended. Stating, “It is important to judge whether or not they have the determination to carry out reforms,” she describes her intentions: “Winning the election is not the goal. The final goal is a major reform of Tokyo.”

Koike also speaks about her own background, stating that thanks to studying overseas at Cairo University she gained access to information resources in English and Arabic as well as Japanese: “In that respect, I may have a slightly different viewpoint than other politicians. My background may be rather unique, but I’ve chosen to believe that someone as odd as me is a better choice for changing an international city like Tokyo.”