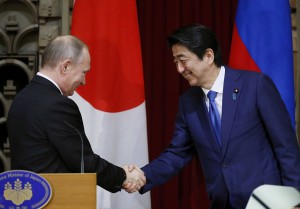 In an article in the February issue of Chuokoron, international political scientist Ken Endo argues that the reason the Japan-Russia summit held in December 2016 is considered to have been fruitless is “the result of excessive expectations.” He notes that President Putin maintained a hardline stance throughout his time in Japan, and that “even with the most generous estimate, the issue of jurisdiction notwithstanding, if the two islands were to be handed over he would be trying to make Japan pay a high price for them.” In response, Japan “has to think about how to keep that cost down.”

Regarding the positions of the two countries, Endo notes that the more confrontational the Japan-China relationship becomes “the greater the incentive for Japan to improve Japan-Russia relations.” However, with recent events such as the new Trump administration in the U.S. being friendly towards Russia, his analysis is that “It seems questionable whether President Putin will have any greater incentive to solve the territorial issue.” Therefore, “The cost Japan will have to pay for a settlement on the territorial issue will increase.”

However, the professor also notes that since it is uncertain whether there will be another Russian administration that is as stable and interested in Asia as the Putin administration is, Japan has been questioning itself: “Should the status quo be left as it is, or should we pay a price and accept limited success?”

In an interview in the February issue of Chuokoron with University of Tokyo Professor Emeritus Masayuki Yamauchi, author and commentator Masaru Sato states that the Japan-Russia summit saw “major successes for both countries,” and he also mentions that Japan-Russia negotiations could move forward: “A path towards resolution might become clear within a year or two.”

Sato’s stance is that negotiations based on the Japan-Soviet Joint Declaration of 1956 (returning the two islands of Habomai and Shikotan) should be prioritized. The reason he approves of negotiations is that instead of the “classic” approach of resolving the Northern Territories issue and signing a peace treaty, “(Both leaders) included this issue as part of a larger strategic perspective and considerations.”

Sato also positively interpreted Putin’s mention of the 1855 Treaty of Commerce and Navigation between Japan and Russia at a press conference in reference to the Northern Territories issue, as showing historical awareness and as a message that “National borders have moved so much in the past. They can be moved in the present as well.”

With Eurasia becoming more destabilized due to factors such as Ukraine and Syria, Yamauchi argues that “Despite latent issues with territorial issues and the peace treaty, Japan is a reliable partner for Russia with a functionally peaceful relationship.” He is of the opinion that Putin thinks “destroying relations with Japan would not be advantageous,” which is in line with Prime Minister Abe’s strategic thinking of "diplomacy that takes a panoramic perspective of the world map," and argues, “It would be a waste not to use this ‘cunning of history’ that has led to the leaders of both Japan and Russia being strategic due to building long-term administrations.”

In the February issue of Bungeishunju, journalist Noriyuki Yamaguchi reported on the behind-the-scenes battle at the Japan-Russia summit, stating that Japan was successful: “With this summit, Putin has been drawn into negotiating in a new arena designed by Abe.” The press statement released after the summit consists of five points, but Yamaguchi states that three important points are “four islands,” “special system,” and “determination,” and that “Abe forcefully wrestled away the three points he wanted.”

Yamaguchi stresses, “Abe repeatedly mentioned ‘determination’ to Putin. This continued to show his intent: ‘Let’s overcome the difficult issues of territory and sovereignty, and sign a peace treaty together.” The statement released including a section stating “Both leaders agreed to move forward with negotiations on joint economic activities on the islands, as well as indicating their firm determination to resolve the issue of the peace treaty.”

On December 6, 2016, Softbank CEO Masayoshi Son surprised the world by announcing plans to invest 50 billion dollars in the U.S. and create 50,000 jobs, after meeting with (at the time) president-elect Trump. In the February issue of Bungeishunju, journalist Yasuaki Oshika mentions how in 2016 alone Son met with UK Prime Minister Theresa May and South Korean President Park Geun-hye for proposals on investment and job creation, as well as meeting with Putin when he visited Japan, and praises Son’s ability: “There are very few people as active as him.”

Oshika notes that the investment Son promised Trump is essentially a “joint proposal” with Taiwan’s Foxconn, and the money is planned to come from a fund sourced with oil money from the Middle East. He also points out that Son and Foxconn have been successful thanks to Apple, which Trump has an adversarial view of. Oshika’s analysis of the goals of this investment proposal is as follows: “Have Trump broaden his narrow-minded view of Islam and the Middle East. Encourage a détente in the ‘Cold War’ between Trump and technology companies such as Apple. And place a Taiwanese company in an important position, to be used as a bargaining chip in America’s China strategy.”