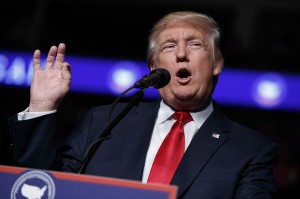 What impact will the Trump presidency have on international affairs and Japan-U.S. relations? Many opinions have been made available, but in an essay in the January issue of Sekai, Rikkyo University Specially Appointed Professor Osamu Nishitani argues that the “historic meaning” of this American presidential election is that “The U.S. has abandoned its desire to expand internationally.” He also states that the results of the election are a manifestation of dissatisfaction with the globalism that has continued to provide the U.S. with freedom and opportunity, and that Trump’s “America First” policy was “an abandonment of imperialistic trends regarding the global economy and military control.”

What is there after globalism? Nishitani puts forward that Trump’s “America First” and Democratic Party candidate Bernie Sanders’ emphasis on being a member of the local community demonstrated “the politicization of people’s life.” Nishitani argues that this politicization is “built by looking at how people located firmly in a community can live their lives, and making adjustments,” and that after globalization the direction wanted is to rebuild the production and distribution of wealth with the community working together.

Given this historical context, what will become of Japan-U.S. relations? In response to the many in Japan arguing that the U.S. “should show more consideration for the world order,” Nishitani is concerned: “This is an excellent demonstration of how far inside America’s institutional space Japan is.” He states that Japan’s American dependency is proven by its “inability to imagine a world order without America at its head.” Nishitani argues that serious consideration should be given to how Japan will function as a country without relying on a U.S.-centric order: “Without being able to consider the concept of an America without ideals, that thinks only of itself, the world will no longer be able to picture the future.”

In the January issue of Bungeishunju, former Prime Minister of Japan Yasuo Fukuda noted how he felt that with the American presidential election “in a way, democracy itself is being questioned.” Stating that fluctuations in American politics and its economy could lead to global instability, he called for “America to get a hold of itself. I would like them to take a stable stance for various policies.”

The former prime minister also makes a proposal: “Why not take this Trump shock as an opportunity to completely reconsider Japan’s position as a nation, which we have stopped thinking about?” Calling for more flexible thinking, he uses Trump’s stated intention to withdraw from the Trans-Pacific Partnership (TPP) as an example: “Even if the U.S. leaves the TPP, there are countless other options. A free-trade agreement (FTA) could be established between Japan and the U.S. Free-trade agreements and economic partnership agreements could then be expanded to other countries.”

In the January issue of Seiron, conservative critic and Takushoku University Guest Professor Masato Ushio states that due to Trump’s basic position of “being a businessman, not a politician,” he will act based on profit-and loss, “thinking of the Japan-U.S. alliance not as being based on ‘shared universal values’ (like the Japanese government), but as a business balance sheet.”

Regarding president-elect Trump’s criticism of the Japan-U.S. security relationship as “not fair,” Ushio notes his understanding that this is because Japan “can only exercise its right to collective self-defense (to a limited extent) under ‘a situation that threatens its survival,’ even under the new security legislation.” He also argues that in order to pay the “fair share” sought by America, it would be necessary to “increase defense spending as a percentage of GDP from the current 1% to 2% or more.”

Ushio also argues that in order to fill the “power gap” around Japan caused by a decrease in American involvement in the international order, “Now is the time to make the decision to maintain firepower…. Japan must carry out the proper policies that it always should have. This will be the start of a fair relationship between Japan and the U.S., and the end of Japan’s postwar period…. This is the perfect chance for Prime Minister Abe to carry out his ‘departure from Japan’s postwar regime.’”