・Hiroshi Yoshikawa and Fumio Ohtake, “Can the rampant pessimism in Japan be overcome?”, Chuokoron, December issue

The pessimistic view that Japan’s economy will shrink significantly due to the declining birth rate and aging society is widespread. In a discussion between Tokyo University Professor Emeritus Hiroshi Yoshikawa and Osaka University Professor Fumio Ohtake in the December issue of Chuokoron, they argue that if the population declines then the income per person will increase. Therefore, there is no need to be worried about the pessimism over population decline, and if innovation is created by investing in education then Japan will still have a chance to growth the economy in the future.

Yoshikawa explains, “The majority of economic growth did not occur due to an increasing population, but because of innovation.” He emphasizes that product innovation creating products and services is the key to economic growth. The professor also points out that Japan has one of the longest life expectancies of any country in the world, and argues that “longevity is the greatest achievement of economic growth.”

The question then is how to bring about innovation. Ohtake notes, “The biggest issue is, of course, education.” According to Yoshikawa, “Innovation comes from human capital,” and investment in education is vital to this end. However, after the collapse of the bubble economy in Japan in the 1990s, companies stumbled when it comes to accumulating human capital. He argues that the increase in “non-regular employment” is emblematic of this issue: “Non-regular employees do not receive enough training within the company, so sufficient human capital does not accumulate.” The failure of business operators to determine the potential needs and seeds of an aged society is also an issue.

Yoshikawa mentions that Japan has extremely low investment in education compared to other developed countries, and argues that in order to increase government spending in areas such as education and support for raising children, “Japanese people will have to pay more taxes in some form.” Agreeing with this, Ohtake replied, “People have to think of those taxes as an investment in innovation, that will end up coming back to benefit us in the future.” He also argued that it is important for it to become a widespread belief among Japanese citizens that although there are difficulties from the population decline, “If we continue creating innovation it will all work out. But patience is necessary.” 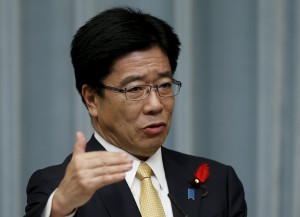 Katsunobu Kato, who holds multiple ministerial posts in the current cabinet such as Minister for Promoting Dynamic Engagement of All Citizens, says in the December issue of Chuokoron about the meaning and importance of working style reform, a key policy of the 3rd Abe cabinet. He also explains the possibilities of allowing multiple working styles, correcting long working hours, expanding telework from home, and enabling working more than one jobs.

Japan’s population has been decreasing since reaching a peak in 2008, and it is estimated to fall below one hundred million around 2050, and then below fifty million by 2100. However, if the “desirable birthrate of 1.8” listed as one of the three targets in the Japan’s Plan for Dynamic Engagement of All Citizens announced by the government in June is met, then the population should be around one hundred million in 2060, and reach a steady state around 2090.

Kato argues that in order to succeed at the dynamic engagement of all citizens, ample social security such as support for raising children, engagement of women in society, and nursing care is vital, and states that “something that affects all these issues is working style reforms.” In particular, he states, “One key to creating the working environment is solving the issue of long work hours.” If it becomes easier to achieve work-life balance, then seniors, women, and youths will be able to participate in the workforce, improving productivity and increasing the chance of innovation occurring.

The minister also points out the long commute times that exist in Japan, and indicates his interest in reforming working conditions and work environments to enable “Working from home or nearby facilities by remote work or telework, two or three days per week.” He also notes that by allowing staff to work side jobs, their perspective would be broadened and innovation encouraged. In order to develop capabilities to change jobs in response to societal changes, considering impact of AI and IoT on society in the future, he argues that it is important to invest in education and human resources, beyond simply “developing work skills.”

In an essay in the December issue of Chuokoron, Hitotsubashi University Professor Ken Kusunoki writes even in a super-aging society, “there are almost no examples of success” for businesses calling themselves a “seniors business.” He explains that the reason for this is those services supported by seniors, such as adult diapers, “were not originally planned and developed as being for seniors, but simply ended up selling and being popular with seniors.” He notes the difficulty of effectively differentiating these businesses in a society with a matured market.

This raises the question of what the requirements are for differentiation. Kusunoki argues “the keyword here is ‘problem solving’,” and uses the development of Mazda’s Roadster sports car as an example. The fourth-generation Roadster, which had less speed and horsepower than the third generation, was developed “as a direct response to users lamenting that excessive competition over fuel economy had led to the extinction of cars that felt good to drive (the problem).” He argues that the recent fuel-economy testing scandal involving Mitsubishi Motors and Suzuki was brought about by this excessive competition over fuel economy, but that the Roadster is “a car developed completely outside the economic miracle competition over fuel economy,” and it became popular with seniors even though that wasn’t the goal.

Kusunoki also argues that Komeda’s Coffee, cafés that are popular with seniors, were developed with a different target than the busy office workers companies such as Starbucks go after. “The original target customers were people who just wanted to quietly spend a long time in a café.” Considering these examples, Kusunoki argues, “It is extremely important when making a business strategy in a mature society to be clear on what you will give up on, what you will not do.”