・Muneo Suzuki, “The return of even two islands would be a great success,” Bungeishunju, December issue 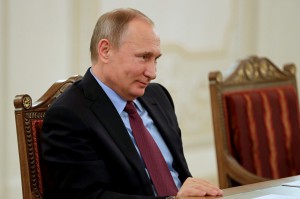 With Russian President Vladimir Putin planning to come to Japan on December 15, there has been increasing hope within Japan that there will be progress in negotiations between Japan and Russia to solve the Northern Territories (the islands of Etorofu, Kunashiri, Shikotan and Habomai) issue. In the December issue of Bungeishunju, Hokkaido native and New Party Daichi leader Muneo Suzuki argues that releasing a statement such as “We will conclude a peace treaty by 2018 and hand over two islands” after a summit between Abe and Putin could be a way to move stagnant negotiations between Japan and Russia forward.

Suzuki explains that one reason he is strongly arguing for a return of two islands is that upon conclusion of the 1951 San Francisco Peace Treaty, Japan agreed to give up the Kuril Islands and Sakhalin Island: “The Foreign Ministry Treaty Bureau Director at the time, Kumao Nishimura, has explained that the Kuriil Islands included the Southern Kuril Islands (Kunashiri and Etorofu). In other words, Japan abandoned Kunashiri and Etorofu.”

In the 1956 Joint Declaration by Japan and the USSR, “An agreement was reached that “Habomai and Shikotan will be handed over to Japan after the conclusion of a peace treaty,” and so Suzuki argues that “President Putin considers the agreement to hand over the two islands in the Joint Declaration by Japan and the USSR to be a legal obligation.” Regarding Japan’s request that Russia hand over all four islands at once, which came up in later negotiations, he is of the opinion that with the collapse of the Soviet Union and the birth of Russia it is no longer being pursued. Considering popular opinion in Russia, Suzuki states “I don’t think it will be possible any more” to continue negotiations over returning Kunashiri and Etorofu after the return of the other two islands.

The question then is what kind of agreement can be reached regarding Kunashiri and Etorofu. Suzuki notes, “There are a variety of options such as joint economic activities, exchanges of people, or joint administration,” and suggests that both Japan and Russia put together their expertises to find a solution. In particular, since Gidrostroy, a major Russian private company, is involved in tourism and public works projects on Etorofu, Suzuki states “It would be beneficial to be able to collaborate with them.”

He also notes that Russia’s 2016 ban on drift-net fishing of salmon and trout in its 200-nautical-mile exclusive economic zone caused “an economic loss of 25 billion yen in Nemuro alone.” Since Japan’s fishing grounds would expand hundreds of times over if Habomai and Shikotan were returned, Suzuki argues that “Instead of the size of the islands, we should be considering the amount of ocean involved.”

・Terumasa Nakanishi, “Allowing the return of only two islands would be tantamount to treason,” Voice, December issue

In the December issue of Voice, Kyoto University Professor Emeritus Terumasa Nakanishi takes an opposing stance, declaring that seeking to have the two islands of Habomai and Shikotan returned first “would mean abandoning Japan’s position on law and justice, its basic principles as a nation.” With Western nations currently severely criticizing Russia for its invasion of Crimea and war crimes in Syria, he argues, “Signing a peace treaty with Russia would be a sign of rapprochement that would obviously be, at the least, ‘inappropriate.’ The government should realize that there is too much that could be lost.”

Nakanishi’s argument is prerequisite on the four islands of the Northern Territories being territory inherent to Japan. When the Treaty of Commerce and Navigation between Japan and Russia was signed in 1855 by the Tokugawa shogunate, both countries reconfirmed their territory and decided on a border between Urup, one of the southernmost Kuril Islands, and Etorofu, located south of Urup. Nakanishi describes this treaty as “the most important point for Japan-Russia relations to this day, based on Japan being a nation founded on law and justice,” and regarding Etorofu and the other three islands south of it, he argues, “It is an undeniable fact that they are inherent territory of Japan, no matter how many years pass.” He also notes that the Japanese-Soviet Joint Communique released when Gorbachev visited Japan in April 1991 is “the first time that both Japan and the USSR (Russia) recognized the existence of a territorial dispute over the four islands in an official document.” Stating that this was a principle Japan should protect at all costs, he criticized taking the easy route of having two islands returned first.

Nakanishi also rejects one of the reasons for arguing for the return of two islands, namely statements in the Diet by Foreign Ministry Treaty Bureau Director Kumao Nishimura on October 19, 1951 in which he accepted giving up Kunashiri and Etorofu. As evidence, Nakanishi presents Prime Minister Shigeru Yoshida’s speech at the San Francisco Peace Conference (September 7, 1951), in which he commented on the USSR’s “illegal occupation” of the Northern Territories and argued that the four islands had been recognized as Japanese territory in 1875 diplomatic negotiations: “This speech was far more important than comments made by the Treaty Bureau director.”

With Putin’s trip to Japan approaching, Nakanishi is deeply concerned about the Abe government’s “new approach” of a rapid improvement in Japan-Russia relations when considered from the perspective of the international situation. With the US and EU strongly objecting to Russia’s invasion of Crimea, he argues that Japanese rapprochement with Russia could lead to a loss of Japanese history and identity, as well as damaging international trust in Japan and even causing the nation to lose support for its security. Regarding the opinion that Japan-Russia rapprochement could help keep China in check, he warns, “If Japan shows any sign at all that could be construed as being willing to hand over territory, China will immediately take advantage of that.” He also argues that Japan-Russia rapprochement could result in a rapprochement between the US and China due to the dynamism of the international power game: “Wouldn’t this be the worst possible situation for Japan?”