・Shin-ichi Fukuda, “Why is there a debate over revising GDP standards?,” Chuokoron, November issue

The Abe administration has listed achieving a nominal GDP of 600 trillion yen as the first goal of the “new three arrows” of Abenomics, but a working paper from the Bank of Japan has caused the debate over revising standards for calculating the GDP to heat up. Tokyo University Professor Shin-ichi Fukuda wrote in an essay in the November issue of Chuokoron that a revision to GDP standards is being considered from two perspectives: 1) whether the current GDP statistics are an accurate measurement of what the GDP is supposed to represent, and 2) whether GDP is actually an appropriate index for measuring the true prosperity of a country.

According to a working paper released by the BoJ in July this year using tax data to calculate GDP, the nominal GDP for FY 2014 was nearly 30 trillion yen higher (at 519 trillion yen) than the government’s official numbers (490 trillion yen). Fukuda cautions, “There are a number of factors that must be considered when interpreting the results of this calculation,” and notes that the national accounting system, created over half a century ago, “is not responding sufficiently to how rapidly changes are occurring now.” Stating that “How to measure the added value of intangible items, such as services, is a difficult question,” he argues for the necessity of “creating basic (primary) statistics responding to dynamic changes in industry structure” in order to increase the precision of GDP statistics.

Also claiming that “GDP is incomplete as an index to measure true prosperity,” the professor gives examples such as the Human Development Index (HDI) used by the United Nations Development Programme to quantify human well-being, and Bhutan’s Gross National Happiness (GNH), while noting, “It would be difficult to claim that any of these indices is supported widely enough to replace GDP.” In the current situation where there is no other option for an index of prosperity that would be accepted by everyone, Fukuda concludes, “Relying on GDP to measure changes to the prosperity of a country is the best option we have for now.”

Nobuo Inaba, Chairman of the Beyond GDP Study Group of Keizai Doyukai (Japan Association of Corporate Executives) and Director of Ricoh, writes in an essay in Chuokoron that the goal of using “gross national income (GNI) plus” as a new index, as proposed by Keizai Doyukai in September, is to move beyond current GDP statistics, as a new set of statistics is necessary that can express prosperity which cannot be expressed by GDP.

The new index GNI+ is composed of multiple indices, both economic and non-economic, and Inaba emphasizes that in the realm of economics, GNI has been suggested to be more appropriate than GDP for determining real economic conditions. In addition to what is included in GDP, GNI would also include income, such as interest and dividends returning to Japan from overseas investments, and according to Inaba, “Using GNI as a base, there would be approximately 20 trillion yen added.”

Another goal is quantifying prosperity in four non-economic areas: 1) social sustainability; 2) social safety; 3) health, sanitation, and life planning; and 4) child raising and education. Inaba notes the reasons for this: “Youth in particular have begun to consider social inequality issues, future life prospects, and social sustainability as important factors in prosperity.” Regarding the Abe administration’s goal of a nominal GDP of 600 trillion yen, he urges careful consideration: “The results of estimates can vary significantly depending on the methods used, so policy that places too much emphasis on GDP would be inappropriate.”

Inaba warns that undervaluing economic activity could not only lead to businesses “becoming more passive towards investment and production,” but if the government misinterpreted that as an economic slump then “they could waste resources” by implementing policies for financial stimulus. Therefore, Inaba argues, “It is extremely important to constantly review what economic statistics are used.” 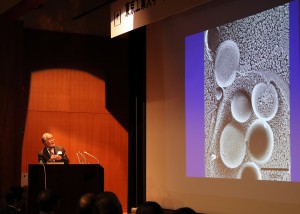 Tokyo Institute of Technology Honorary Professor Yoshinori Ohsumi won the 2016 Nobel Prize in Physiology or Medicine for his discoveries of mechanisms for autophagy, the process in which cells break down their own proteins to reuse them. In a discussion published in the November issue of Chuokoron, he comments on scientific research in Japan, saying “I believe that the idea of being ‘useful’ has poisoned Japan.” While arguing that the spread of “useful” science has significantly worsened the research environment in Japan, he also warns, “If there is no awareness that people doing useless research is extremely important to society, science in Japan will become a tragedy.”

Regarding the current situation in which scientists follow popular research trends, and may have no choice but to, he says, “If you don’t do trendy research, you don’t get published in the leading journals…. The current system is set up so that a paper is considered high-quality if everyone cites it.” According to Ohsumi, “citations are unimportant,” and calls for rethinking the current state of scientific research which focuses on publishing papers.

Arguing that “At this point, Japan’s basic science researchers have no choice but to reconsider their belief that science is something supported by the government,” he warns, “If this situation continues for even a decade, Japan will be unable to train any new researchers with potential, and science in Japan will be crippled.”