Realism in Japanese Foreign Policy/Unsung Heroes of the Paralympics

In a column in Voice, international politics scholar Dr. Lully Miura notes that with China’s maritime push in the East and South China Seas, Japan is “faced with a situation that necessitates realism as the basis for awareness and actions.” Realism involves “accurately recognizing the vulnerability of your position, and acting based on that,” and she argues for the necessity of recognizing that the actions taken by China, a nuclear power, in the East China Sea and the Senkaku Islands “cannot be stopped by Japan alone.”

In particular, Dr. Miura warns about China’s salami-slicing strategy of gradually escalating disputes: “History teaches us that it is extremely difficult to block this kind of strategy.” Therefore, stating that a real worsening of the security situation in East Asia is “a trial that has not actually been experienced” by Japan since World War II, she argues that the reliability of the Japan-US alliance and the level of the security debate within Japan should be improved as soon as possible.

During the first presidential debate of the US election, the Japan-US security alliance was a major point of contention, and in a column in Bungeishunju, journalist Yoichi Funabashi warns that “the Japan-US alliance, considered rock-solid, is approaching a critical turning point.”

The first reason Funabashi gives for this is that as a part of the “give-and-take” that occurs as the US builds relations with its strategic rival China, “There is a possibility of concessions that do not coincide with the interests of American allies.” He mentioned China’s noticeable military buildup as a second reason, stating that if the US determined that “the presence of the US Army in Japan could, instead of acting as a deterrent towards China, be increasing the risk of the US getting caught up in a war between Japan and China… the strategic value of Japan would change into being a strategic detriment.”

The third reason according to Funabashi’s analysis is “global intervention fatigue” and “a growing movement against the free market, combined with increasing distrust in ‘credibility.’” Credibility refers to the idea that if the US does not intervene militarily on the behalf of an allied nation, there would be a loss of confidence towards American defensive commitments. Funabashi noted that the Obama administration might believe that the basis for “the Vietnam War and Iraq War, the greatest follies of the century,” was due to this argument for credibility.

He says that this situation, with uncertainty towards the reliability of the Japan-US alliance and the failure of the promotion of the Trans Pacific Partnership (TPP), has caused those in Japan to question, “Has the US reached its end as a world power?” According to Funabashi, a high-ranking Japanese government official said of the Obama administration that “They have almost no interest in the US’s long-term strategy, or the role allies play in it.” He argues that the lame duck Obama administration has no room for other concerns than creating a legacy, and its foreign policy is “just the tip of the true risk to the 21st century Japan-US alliance lurking beneath the surface.”

In an essay in Voice, former President of the Republic of China (Taiwan) Lee Teng-hui proposes that, as the Internet of Things networking of various objects is going to bring about the fourth industrial revolution, “By combining the R&D capabilities of Japanese companies with the manufacturing technology of Taiwan, dominating the global market could be more than a dream.” He argues that if Taiwan became a major manufacturing base for IoT, it could maintain a GDP of 3-4%, and the Japanese economy “could grow once again.”

Either way, Lee asserts that, as Japan and Taiwan are the most democratic countries in Asia, are both island countries, and have shared values including human rights and peace, “Japan and Taiwan must cooperate even more closely, sharing the same fate.”

■ Unsung Heroes of the Paralympics 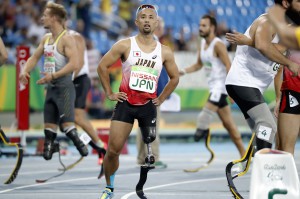 With the 2016 Olympics and Paralympics in Rio de Janeiro, Brazil having ended, nonfiction author Mitsuru Jojima wrote in Bungeishunju about the history and trials of the designers and engineers who have contributed to the evolution of prosthetic legs for Japanese Paralympians.

One of those designers is Fumio Usui, a leading figure in prosthetic limb design in Japan. In1984, at the age of 28, he happened to take a prosthetist course at vocational training school. At that time in Japan, the final goal of rehabilitation was to be able to walk straight with prosthetic legs, and no one even considered running on prosthetic legs.

According to Jojima, the games were first officially referred to as the “Paralympics” in the 1964 Tokyo Games, with “para” coming from the word “paraplegic.” At the 1988 Seoul Games, when the term Paralympics was officially adopted, they clearly stated that the “para” referred to “parallel,” with the Paralympics being “another, parallel Olympics.” Development of prosthetic legs in Japan accelerated from this point, and in 1991 Usui founded Health Angels, the first athletics club for athletes with prosthetic legs in Japan. Afterwards, in order to develop high-performance prosthetic legs for competitions, develop of parts rapidly accelerated.

Jojima suggests that an even more significant turning point came when Professor Shunji Yamanaka of the Tokyo University Institute of Industrial Science, an industrial designer, decided to make the shift to “designing beautiful prosthetic legs.” Yamanaka announced the Rabbit, the first model of these beautiful prosthetic legs meant for competition, in 2009. Ken Endo, who was researching humanoid robots at Sony Computer Science Laboratories, founded Xiborg in 2014 as a company for developing prosthetic legs for competition, which is just one more example of the spread of prosthetic leg development in Japan.

Jojima comments, “There are now 11 universities and specialty schools in Japan that train prosthetists. The people who create prosthetic legs, the environment surrounding them, and public awareness have all undergone major changes.”