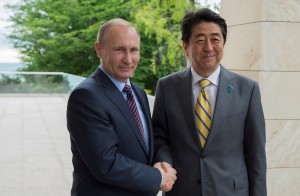 President Putin of Russia plans to visit Japan in December, for the first time in 11 years. In an essay in Gaiko, Hosei University Professor Nobuo Shimotomai writes that the turning point for negotiations between Japan and Russia was the agreement on a new approach towards peace treaty negotiations when “Prime Minister Abe met unofficially with President Putin in Sochi on May 6.” The professor indicates his hope for new progress in negotiations between the two countries.

Shimotomai notes that one reason Russia is interested in quickly improving relations with Japan is that “Since the Ukrainian crisis, Russia’s has been in a worsening diplomatic position, particularly with the West and the G7.” Considering the country’s difficulties when it comes to relations in the Middle East, and resource diplomacy, the professor’s analysis is that “Russia is surrounded by enemies on all sides, with the sole exception being to the east.”

In particular, he argues that the eight-point economic cooperation plan Abe proposed in May “stole Putin’s heart,” with Russian interest in a “4th Industrial Revolution” in science and technology meaning “Relations with Japan have an appeal that doesn’t exist with China, India, or South Korea.” Since both Abe and Putin have high approval ratings in their respective countries, Shimotomai states that “it is possible for political decisions to be made between Japan and Russia,” but he also emphasizes that for the time being “It will be necessary to watch and wait for negotiations on the peace treaty to be carried out quietly between veteran ambassadors.”

Tomoaki Nishitani, a Junior Fellow at the Institute for International Economic Studies, writes in Sekai that “Japan is not a core issue for Russia,” and regarding the Northern Territories issue he declared that “the northern islands will not be moved forward by the economy.” He argues that in order for the talks between Japan and Russia to bear fruit, it is necessary that both countries share the same perspective and policies on the overall situation in East Asia, and that “If the Northern Territories issue is going to be solved, it will be as a result of that situation.” He states that the summit meeting during Abe’s visit to Russia in September would be “the next milestone” in Japan-Russia relations, and notes his hopes for the “forward-looking approach” indicated by Abe in Sochi by writing “I believe it is to share a vision for the future of Japan-Russia relations, and cooperate to work towards that future.... There is a possibility for a new age in Japan-Russia relations.”

Regarding China-Russia relations, which are “the friendliest they have ever been,” Nishitani mentions that delays to huge projects between Russia and China, such as a high-speed railway to Moscow and a bridge between Crimea and the Russian mainland, “show that China no longer considers Russia important.” In order for Japan to guard against further Chinese expansion, “Russia can play a major role. To protect the stability of the Asia Pacific, it is important that Russia not become China’s lackey, and be in a position where they can keep in balance with each other.”

In Voice, Kyoto University Professor Emeritus Terumasa Nakanishi writes that the two China-Russia summit meetings held in June this year “can be seen as the establishment of a China-Russia alliance from the perspective of international politics,” and argues that “Putin has taken an unprecedented step towards realizing a China-Russia alliance in Asia.” The professor analyzes the reasons behind this move as being that European political strength and security capabilities have decreased due to Brexit, and Western diplomatic influence has decreased globally, leading to Russia “deciding that it would not be forced into defending itself on two fronts” from both Asia and Europe.

Nakanishi also states that the core of China’s Xi Jinping and Putin’s strategy is “just one point: driving the US out of Asia,” and he argues that “Ignoring these strategic considerations and casually moving forward with Japan-Russia relations must not be done.”

These women strive to have a fulfilling life offline in the real world, and this trend is being further encouraged by the photography SNS Instagram. They upload pictures of their wonderful life, and further polish their comfortable lifestyle. One unique characteristic is their consumer outlook, called “photogenic consumption,” a tendency to buy products, services, and experiences that look good in photos.

At the same time, this generation wants to live a legitimately fulfilling lifestyle. These women are earnest and health-conscious, and according to Takigawa “The desire to get married later is not as strong as the mass media is reporting, and in fact more women are becoming interested in marrying young.”

Takigawa states that being a housewife is a job that young women now admire, but that realistically “Only 8% of women believe ‘I will be able to be a housewife after getting married.’” She also notes that faced with the reality of 1 out of 2.9 marriages in Japan ending in divorce (2015), these women “are constantly afraid of the possibility of divorce.” Therefore, Takigawa argues that “When there are women in their 20s and 30s in a workplace, instead of treating them all the same way, please respect that different people have different lifestyles.”