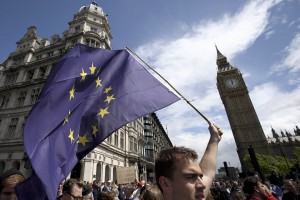 The June 23 referendum in the UK resulted in a victory for the side that wanted to leave the European Union. In the August issue of Chuokoron, commenting on his shock at the decision to leave the EU, Hokkaido University Professor Ken Endo writes “Honestly, I was surprised social divisions had become deeper than I imagined,” and also points out “The fervor surrounding this referendum in the UK is likely to cross the Channel and spark similar movements throughout continental Europe.” (Photo: Reuters/ AFLO)

Endo argues this result shows “Politics are leaning further to the extremes on both the left and the right, with the center becoming buried,” and notes his concern that the existence of parties such as the UK Independence Party, a populist party that ran its anti-EU campaign using the immigration issue as a scapegoat, mean “There is a high risk that the administration within the UK will fall into chaos.” Stating that “the sense of unity as a united kingdom is also falling apart,” he provided his analysis that in Scotland, which held a referendum on independence from the UK two years earlier, “There is no doubt this will provide the independence movement with greater momentum.”

Endo argues “We may see a situation where xenophobic tendencies and anger at the EU spread throughout Europe, leading to the EU losing its capability as an important actor, and becoming paralyzed…a restructuring of the EU is inevitable.” Specifically, he believes a gradual differentiation will take place between a primary league of the original six core members (France, Germany, Italy, and the three Benelux countries) and a secondary league of the other 22 countries such as Greece and Poland. Endo states that “This would be neither a unilateral consolidation, nor an irreversible dissolution, but something in between, like a series of concentric circles with the core countries in the center and the rest further out.”

He also noted that while there are growing xenophobic and inward-looking tendencies within Europe, with many people hostile towards immigrants and the EU, the reality is that “Globalization cannot be stopped.” While mentioning that this is a global issue, also relevant to the Trump phenomenon in the US, Endo concludes “With further globalization, it is important that the working and middle classes are provided with greater value and protection worldwide.”

In response to the shocking news of the UK’s decision to leave the EU, there was significant chaos in international markets for a time. In the August issue of Bungeishunju, Noriko Hama, Professor at Doshisha University Graduate School of Business stated that “Uncertainty in the financial and foreign exchange markets will always be unavoidable in the face of some event,” but looking at the real economy she provided her analysis that “It seems unlikely that the situation will get progressively worse.”

Although the UK’s decision to leave the EU was generally regarded around the world as surprising, Hama argues that it was no such thing: “Considering the character of the British, and the history of relations between the EU and the UK, it was only natural that this occur eventually.” Her explanation is that the UK’s stance towards the EU was based on “Participating superficially in an integrated European framework, while not implementing all of its initiatives,” and that this result demonstrated “the UK’s position of keeping a certain distance from an integrated Europe.”

According to Hama, this is not the first incident of the UK leaving Europe, mentioning when the UK withdrew from the European Monetary System’s (EMS) Exchange Rate Mechanism (ERM) in September 1992. At the time, the value of the British pound plummeted, but having been removed from the constraints of the ERM the UK economy gradually recovered. Stating that the only time the UK approaches the EU is when there is economic merit, Hama declares that “Practical benefits can be used as a barometer for relations between the UK and the EU....The true value of the British way lies in being utilitarian, going with the flow, and adapting quickly.”

Hama’s view on the future of the EU is that “With the collapse of the Cold War system and the progress of globalization, it is becoming increasingly difficult to keep countries locked within the framework of the EU.” She theorizes that if a “non-restrictive collective relationship” can be reconfigured, such as the UK has chosen, then it may become “a model for a new form of European integration.”

Regarding the impact of Brexit on Japan, Hama argues that if the Abe administration implements more quantitative easing to ensure a weak yen and high stock prices and so further increases the budget deficit, it will significantly decrease the value of the yen, which in the current situation is the only aspect of Abenomics that is well-regarded. She emphasized the importance of “Normalizing the abnormal monetary policies of zero interest and quantitative easing as soon as possible.”

In the August issue of Chuokoron, Keio University Professor Yuichi Hosoya states that the decision by the UK to leave will “leave behind massive scars on the EU as a whole and on the global economy.” He argues that the rise of conservatism in the West, including far-right parties, is due partly to a backlash against globalism progressing without any political, economic, or social safety nets, and “people fearing that globalization will lead to the destruction of their society.” At the same time, his analysis is that “What is currently occurring around the world is a social shift, striking back against highly-educated elites and specialized experts, who have lost influence.”

Hosoya describes the American crisis as being fundamentally the same as the crisis in Europe, and therefore “It is necessary to look for a solution at the global level.” He has a suggestion for what path Japan should take in this situation: “Considering global trends, it is clear that Japan has no choice but to become a moral leader.” Considering it has been protected by the security framework of the West it would not be easy for Japan to take responsibility for leading the world, but it has the third-largest economy in the world and a relatively stable political system, and so Hosoya argues Japan “should be able to establish a number of global agendas, and convince other countries to carry them out.”