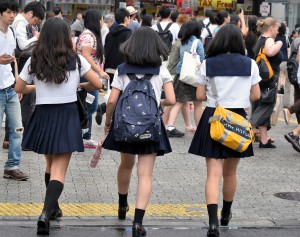 The House of Councillors election set to take place on July 10 will be the first Japanese national election in which 18 year olds will be able to vote. An aging population and gerontocracy (domination by the elderly) are major political and economic issues faced by countries around the world. There is a growing amount of criticism regarding the negative effects of this kind of “silver democracy” that ignores the demands of the youth and prioritizes policies that benefit seniors. Resolving the intergenerational conflict that has arisen with the decreased birth rate and rapidly aging population will not be simple. (Photo: Natsuki Sakai/aflo)

Osaka University Professor Emeritus Takenori Inoki wrote an essay that looks at the roots of this issue. He suggests that the changing age structure due to the decreased birth rate and aging population is aggravating intergenerational conflict, and provides his analysis that “One reason the conflict between generations has risen to the surface is a fundamental change to family structures.”

The professor states that in recent years, the fundamental structure of society has changed: “Although originally it was built from vertical relationships, now it is considered a matter of course for these to become horizontal relationships.” As a result of society experiencing economic prosperity due to the market economy and democracy, he notes that “Abundance has increased people’s desire for independence, and weakened the spirit of cooperation in all generations.” Therefore, seniors and youth are not connected in a collective as a family, and now “Both groups see each other as unrelated, isolated groups.”

From the perspective of “fairness,” Inoki specifically mentions “revisions to the electoral system by lowering the voting age” as a direct method to “restore balance between generations.” There will be 2.4 million new young voters for the Upper House election in July, but while declaring that “Lowering the voting age won’t be enough to save ‘aging Japan’ by itself,” he proposes that since people have different concerns and issues at different ages “There is a need to create opportunities for people to discuss ‘public affairs’ with members of their own generation.” Also, in order to engender “compassion for other generations,” which is vital to solving this issue, he suggests starting with experimental measures such as organizing collegial bodies for debate among members of the same generation to identify what issues are important to each generation.

Economist and Okayama University Professor Akira Okamoto is of the opinion that not only is Japan becoming more of a silver democracy, but that “The silver democracy is aggravating the declining birth rate and aging population, creating a downward spiral.” In order to break free from this vicious cycle, he proposes that “Drastic election reforms should be implemented as soon as possible.”

He provides three specific suggestions for election reforms: giving minors voting rights, and having their parents vote for them in a “domain voting method;” dividing voters into age groups, and selecting a proportionate number of representatives from each of the youth bloc (20s to 30s), the middle-aged bloc (40s to 50s) and the senior bloc (60 and over) in a “generational bloc election system;” or weighting votes based on the voter’s remaining life expectancy to make the votes of young voters more important, in a “life-expectancy election system.”

While allowing that “Some may argue that all the election system reforms I’ve listed here are unrealistic and drastic, and that no country in the world has actually implemented them,” Okamoto stresses that “Japan currently has a declining birth rate and aging population that no other country in the world has experienced before, and we must deal with the reality that the levels the country has reached are unprecedented.” He argues that for this reason, election reforms will “Eliminate the sense of hopelessness afflicting younger generations, and make it possible to implement policies that incorporate long-term perspectives.”

・Noritoshi Furuichi, “Something more important than a voting age of 18,” Chuokoron, July issue

Sociologist Noritoshi Furuichi writes in the July issue of Chuokoron that, although he approves of the lowered voting age, “I believe that it is more important to lower the age of candidacy…. There are often ministers in their 20s overseas. Countries whose leaders are in their 40s, such as Canada, are not uncommon…. It is obvious that someone in their 20s would be a more appropriate Minister in charge of Cool Japan than an old man in his 60s is.” Furuichi argues that “Lowering the age of candidacy will be the first step to politics that actually includes the younger generation.” Commenting on the lowered voting age, he states “Lowering the voting age by two years will cause almost no change to society…. There will only be 2.4 million new voters. That is only a tiny fraction of the total.”