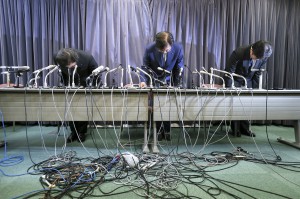 There has been a string of scandals and poor business results at major Japanese companies recently, with major losses for Sharp, falsified accounting at Toshiba, and Mitsubishi Motors falsification of mileage data. Waseda Business School assistant professor Akie Iriyama explains this situation, writing “The biggest issue is that Japanese corporations are not good at dealing with failure.” He states that it is important to “bring failures to light, and recognize them for what they are,” and declares one thing these three companies have in common is “a corporate culture that is unable to recognize failure.” (Photo: AP/ AFLO)

He also suggests that one reason for the recent poor performance of Japanese corporations, despite their past successes, is that their management structure has not kept up with changes to the “shape of competition.” He states that “Corporations that were previously successful due to their ground-level operations are not skilled at flexible low-cost or differentiation strategies.” He also writes that the lack of skilled management professionals is a serious issue, and that corporations releasing medium-term business plans every three years has a significant negative impact. “Carrying out medium-term business plans every three years is just repeating the same ‘deepening of knowledge,’ with a tendency to neglect ‘searching for knowledge,’ and has become a factor in the lack of long-term innovation.”

Although Taiwan’s Hon Hai Precision Industry Co., Ltd. now controls Sharp, from half a century ago the company was home to a man called by some “the father of the Japanese electronics industry,” a leading figure in developments such as LSI (large-scale integrated) circuits and liquid-crystal displays (LCDs). That man is former vice-president of Sharp Tadashi Sasaki, who commented optimistically in an interview with Bungeishunju: “There is no need to be embarrassed about this acquisition and feel it is a loss…. The day may come when Sharp is able to acquire shares in Hon Hai, like what happened with Nissan and France’s Renault.”

Sasaki further said that technological developments should be “shared with everyone, in order to quickly improve them many times over. With this kind of co-creation, engineers can contribute to the progress of humanity.” He argues that when a business is doing poorly, it should engage in co-creation with rival corporations, as opposed to hoarding its developments.

To demonstrate, Sasaki gave examples from his own time at Sharp. When a young Masayoshi Son (president of Softbank) came to try and sell electronic translators, Sharp bought the technology itself for 160 million yen. Another example is when Apple founder Steve Jobs suddenly visited in 1985, Sasaki introduced him to Sony. “There is a limit to how much one person can do alone. ...That’s why you must not keep everything for yourself.”